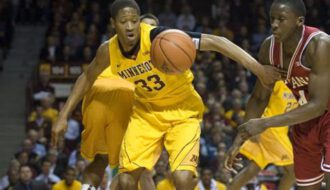 The weekend is here with another fantastic night of March Madness conference tournament action.

You can feel the NCAA basketball tourney getting closer as conference matchups heat up. The battle for berths and seeding intensifies with every passing day leading up to the Big Dance.

Our expert handicappers give their free comp plays and predictions with reasoning for Friday, March 8, 2019.

Click on a handicapper’s name to view their page with more top plays, predictions, subscriptions, handicapping records and more.

I like the spot for Maryland tonight. They are coming off back-to-back losses at Penn State and at home to Michigan. They’ll clearly be highly motivated for a victory tonight at home on Senior Night against Minnesota. The are 14-3 at home this season.

Meanwhile, Minnesota is coming off back-to-back upset wins at Northwestern and at home against Purdue. They stormed the court after that win over Purdue, which punched their ticket into the NCAA Tournament. I fully expect them to come out flat tonight at Maryland after that huge win.

The Gophers are just 2-8 SU in true road games this season. The Terrapins are 8-2 ATS in their last 10 games following an ATS loss. Minnesota is 1-7 ATS after covering two of their last three against the spread this season. Bet Maryland Friday.

The books are giving the Quakers way too much respect here at home against Yale. This is the ideal spot to jump on Yale, who we know is going to be hungry off a upset loss at home to Columbia.

The Bulldogs haven’t lost back-to-back games since the first month of the season. Last two times they were coming off a loss they won their next game by 20+, covering the spread by double-digits both times.

Bulldogs are 4-1 ATS last 5 on the road after playing 3 straight at home and 4-0 ATS last 4 after failing to cover the spread in their last game. Take Yale!

The Belmont Bruins are 13-0 SU & 9-2-2 ATS in their last 13 games overall. A whopping 12 of those 13 wins have come by double-digits. They have a bye to the semifinals of their conference tournament today where they’ll take on Austin Peay, which played last night in a win over Morehead State.

For all comp plays and predictions for Friday, take a look at the free NCAA basketball picks page.