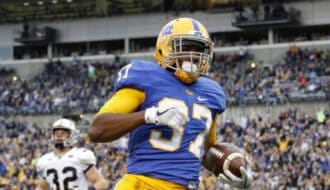 Game time is 7:30 PM eastern time and will be televised on ESPN.

Below is current odds and all available best bets for Thursday night’s NCAAF showdown released by our expert football handicappers.

You won’t find another handicapper on this site that can claim to have FIVE Top-3 NCAAF Finishes since 2008! Three have come within the last five seasons as I was #1 in 2020-21, #2 in 2017-18 & #3 in 2016-17! I am the #1 Ranked NCAAF Capper All-Time on this network of handicappers! I am releasing a 5 Unit BEST BET Thursday in the North Carolina/Pittsburgh ACC showdown on ESPN at 7:30 EST tonight! These 5 Unit plays are my *BIGGEST* releases on a daily basis, and this one is GUARANTEED or I’ll send you Friday’s NCAAF plays for FREE!

Do you want to beat the CFB odds on Thursday? You can with my BEST BET on North Carolina v. Pittsburgh!

You’ve found one of the TOP CFB handicappers in the world who is ready to DELIVER PROFITS for you on Thursday.

Are you ready to START MAKING MONEY off of college football?

It’s not too late for you to MAKE SOME MONEY too!

This play comes GUARANTEED TO WIN or else you get the next day of CFB FREE from Bobby!

Nobody and I mean NOBODY DOMINATES CFB like Bobby does and he is LOCKED and LOADED to do so again on Thursday!

**#11 ranked ALL SPORTS handicapper on this site!**

Get in on one of the BEST over/unders for sale on the site today for NCAA-F. It’s my TOTAL DOMINATOR on North Carolina v. Pittsburgh and it will “Totally Dominate!”

Jeff GUARANTEES TO PROFIT or you get Jeff’s next CFB card absolutely FREE!

AAA Sports is off to a solid start to the week. They’ve gone 7-3 overall the L3 days with a PERFECT 2-0 record in College Football!

After cashing Ohio on Tuesday, AAA had Northern Illinois on Wednesday! Both those underdogs won their respective games STRAIGHT UP! So it’s now a 6-1 run in NCAAF! Up next is AAA’s “BEST OF THE BEST” from the ACC!

184 games OVER .500 producing $93,840 FOOTBALL PROFIT! That is the long-term run for long-time Football Expert Scott “The Bulldog” Rickenbach. Short-term? He is 13-3 / 81% L16 Punishers across all sports even after a 4-0 SWEEP Tuesday was followed by a tough 1-3 Wednesday. This Punisher is on ESPN *THURSDAY* and UNC/PITT demands his HIGHEST rating!

Sean is off to an 0-2 CFB start this week. Needless to say, he’s not happy about it and fully expects to get back on track and make it EIGHT out of his last 11 CFB big ticket side winners with his 10* ACC Game of the Month for November, featuring North Carolina vs. Pittsburgh on Thursday night; make sure you’re on board!

North Carolina and Pittsburgh go at it in this special ESPN Thursday night game and it’s football maven Stephen Nover’s strongest ACC play of the season. Stephen is having a banner college football season. He’s been at his finest, too, on his biggest plays going 18-8-1 on his Max Unit plays for 69 percent! So stack the odds high in your favor by taking advantage of Stephen’s expertise, elite analysis and monster big play track record on his ACC Game of the Year!

Ben Burns WON BIG when UNC came back to beat Wake Forest, as he remained 100% PERFECT YTD with those teams. The Tar Heels are back in action Thursday and Burns LOVES the setup. Do the Heels build off their comeback win or do they suffer a letdown? On a 50-34 RUN with his college football, Ben KNOWS the answer. Don’t wait. Get down IMMEDIATELY!

Do you want to CASH IN on North Carolina v. Pittsburgh Thursday? If so then all you have to do is SIGN UP for our 10* Info Play!

We’ve done all the work and know what the BEST BET to make on this game is. Let us prove it to you!

We MUST SHOW A PROFIT or else you will get Friday’s PREMIUM CFB PICKS on us!

When all of my sources, contacts, systems, and stats agree on a game it’s usually BIG! We have that situation tonight on North Carolina v. Pittsburgh and it’s a game you are not going to want to miss out on!

No. 12 NCAA-F Handicapper This Season!

Fargo is coming off an EASY WINNER on Central Michigan to keep DOMINATING! He is on a 24-18 run going back to October in CFB and he has a HUGE Top Play for Thursday that CASHES WITH EASE! Grab a subscription so nothing is missed this week and weekend!

Since last Friday, Ross is a red-hot 6-1 with his college football picks. Ross has a 5* winner on tonight’s nationally televised game between North Carolina/Pittsburgh (7:30 ET/ESPN). Cash in on another of Ross’ college football red-hot picks simply by making the purchase and wager.

Only one game on the college schedule tonight an that has North Carolina traveling to Pittsburgh to take on the Panthers. Jim Feist has the winner for you between these teams. Get ready for a big weekend of winners with Jim’s College Football Thursday clash.

Do you want to GET PAID on Thursday? Then DO NOT MISS his NO DOUBT ROUT on North Carolina v. Pittsburgh!

The PLATINUM SUPREME COLLEGE FOOTBALL Signature move previously only available to Rob/s Client base. This Limited Level Investment is for those looking to step out.

The North Carolina Tar Heels take on the Pittsburgh Panthers in Thursday night prime time College Football action. Which side has the edge? Get the scholastic gridiron info the books do not want you to have. kick off after 7:30 pm et

As always, this play comes 100% GUARANTEED! We MUST SHOW A PROFIT or else you will get tomorrow’s PREMIUM CFB picks on us!

When ALL of my college football oddsmaking, sportsbook, and sportsbetting contacts come in with the same team as my analysts and I, it becomes a CONSENSUS PLAY which are 9-2 this season. WOW! You can’t argue with success. So, join me here with this winner, and be on the same information as the sharpest people in the business.

Al McMordie has the winner of tonight’s ESPN College Football match-up between North Carolina and Pittsburgh, as it’s out of a 100% Perfect, 11-0 ATS situation. Don’t miss the 12th WINNER IN A ROW. Get on board right now, and watch your $$$$ roll in tonight!

After a few bad days I am looking to bounce back and continue my MASSIVE 124-105 RUN for +$10K streak over the last 2 months!

Total play for Thursday’s matchup between North Carolina and Pittsburgh.

By specializing in one league, Matt catches the opportunities other experts miss by casting too wide of a net.

You are leaving money on the table the longer you wait to start betting his recommended picks!

*This package must show a profit or Matt’s next available college football card will automatically be added to your account at no charge.

Fancy wagering on a MASSIVE play?! This pick truly is one of my biggest of the season, it’s my one and only ACC Game Of The Year (and the best thing about it is, it goes on Thursday night!) The winning continues in earnest, so don’t be shy in joining!

View all available college football best bets released by our experts every week during the 2021-22 season.