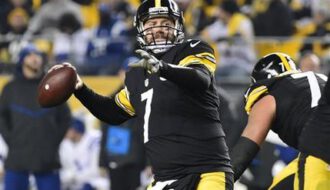 This AFC conference game is scheduled to start at 8:20 PM ET and will be televised on ESPN.

Pittsburgh vs. Cincinnati Under 40.5

The Under here is worthy of a move. Cincinnati is going to have plenty of issues trying to score. Look for Pittsburgh to keep the clock running and moving the chains, as they love to control the tempo. Cincinnati has lost all their firepower with Burrow out and this will not be a defense they find success against.

Monday NFL Free play. My selection is on the ‘under’ between Pittsburgh and Cincinnati at 8:15 pm et on Monday.

I’m not anticipating a great deal of offensive fireworks in this AFC North showdown on Monday night. The Steelers should obviously have their way with the Bengals very beatable defense in this one but whether we see them keep their foot on the gas for four quarters remains to be seen. Meanwhile, the Cincinnati offense is unlikely to generate much offense at all with third-string QB Ryan Finley taking over the offense for an ineffective Brandon Allen. Note that Cincinnati’s offensive line has been a tremendous disaster this season with only one team giving up more sacks. The Bengals season essentially went down the drain when QB Joe Burrow was lost for the season and they’ve shown very few signs of life since. We can expect them to play hard in this rare opportunity to perform in front of a national audience but they’ll simply be looking to keep things respectable. This is a low total by today’s NFL standards, but it’s warranted in my opinion. Take the under (8*).

Sean is coming off a WINNING NFL Sunday and is now 4-1 on premium NFL plays this week! He’s riding a RED HOT 35-15 NFL big ticket run and it continues with his 10* AFC North Game of the Year on MNF! Your best bet is a weekly or monthly subscription package, giving you access to ALL of Murph’s winners every day!

I am off to a 159-112 Football Start this season that has me sitting as the #1 Ranked Football Capper in 2020! I am releasing a 5 Unit BEST BET Monday in the Steelers/Bengals AFC North rivalry on ESPN at 8:15 EST tonight! These 5 Unit plays are my *BIGGEST* releases on a daily basis, and this one is GUARANTEED or I’ll send you Tuesday’s NCAAB plays for FREE!

Jack has delivered 14 WINNING CARDS L17 Days and he is riding a 51-32 Overall Run since November 26th in all sports! He is on a 7-1 NFL Run over his last eight releases! And he is the KING of Monday Night Football with a 52-33 MNF Run over his last 85 plays! He adds to it with his 20* Steelers/Bengals ESPN No-Brainer for just $39.95 Monday! He has the winning side in this game NAILED tonight behind a PERFECT 6-0 System in his analysis!

GUARANTEED or Tuesday college football is ON JACK!

Matt is ready for a strong finish in the NFL as we end Week 15 looking to extend a SWEET 27-19-2 NFL Run! Also, he brings in a SOLID 20-10 Primetime Run into Monday Night and his +$35,015 NFL run is extended as he keeps the Primetime SURGE rolling!

Whatever your betting plans are for Monday night, make sure they include Mike Lundin’s STEELERS @ BENGALS 10* NFL TOP PLAY OF THE DAY. Make your move now and hit the bookie hard with this TOP RATED release.

Ben Burns WON BIG with both his basketball AND his football on Sunday. Including a 2-0 SWEEP with last Monday’s football game, Burns is a BLISTERING 50-33 his past 83. Don’t make a move on tonight’s STEELERS/BENGALS ‘side’ until you’ve checked in with him first!

Already 4-1 in NFL action this week, Sean’s RED HOT 35-15 NFL big ticket run continues with his 10* AFC North Game of the Year featuring the Steelers vs. Bengals on Monday night! If you enjoyed Murph’s easy winner with his AFC North Total of the Year (BAL-PIT under on Dec. 2nd) you’ll absolutely LOVE this one; punch your ticket now!

Ben Burns WON HUGE Sunday and that included a 2-0 mark with his top-rated releases, Minnesota “outright” over St Louis on the hardwood and the Eagles/Cards “over” on the gridiron. Speaking of 2-0, Ben was 2-0 last MNF, winning side AND total, continuing his long-standing mastery of Monday night football. Now, he gives you the *STEELERS/BENGALS!*

Don’t miss out on a golden opportunity to build your bankroll with Steve’sSteelers/Bengals NFL Sharp Money Top Play ($34.95)!

With the Chargers win on Thursday, AAA improved to an OUTSTANDING 13-2 on TNF this season! Incredibly, they are also on a 12-2 run on Monday nights!

Last week on MNF, AAA won their #1 AFC North side (Baltimore). This week, Steelers-Bengals is their #1 total! Get it NOW!!

If you are looking for the BEST BET in NFL for Monday then this is the ONE! Sal’s 10* Platinum Club Play is as STRONG AS IT GETS and it goes on Steelers/Bengals!

If you think it’s time to WIN SOME MONEY on Monday then it’s time to you get signed up for my 5* NO BRAINER on Steelers v. Bengals!

When all of my sources, contacts, systems, and stats agree on a game it’s usually BIG! We have that situation tonight on Steelers v. Bengals and it’s a game you are not going to want to miss out on!

John Ryan is hammering the books on a 12-6-1 all sports record including 6-1 ATS in the NFL and the only loss was by the hook betting the Saints. So, here is another Best Bet that is packed with confidence-building analytics that show you WHY this is the Bet to make tonight. He also provides you FREE bonus Teaser bet too.Currently 17-6 (74%) over his last 24 football picks! $1,000/game bettors have made $10,630 since November 22, 2020 by following his advice!

The Pittsburgh Steelers take on division rivals the Cincinnati Reds in Monday night prime time NFL action. Which side of the total will the combined score fall on? Your 100% Guaranteed answer is locked and loaded and ready to make the books pay for taking our action. kick off after 8:20 pm et

In NFL, the week began with Power cashing his #1 TNF play for 2020 on the Chargers OUTRIGHT! It ends with his #1 MNF total for the season! What are you waiting for? Get in the game!

Larry’s coming off a 10-4 all sports Saturday and Sunday (Dec NFL 10* G.O.M. win on Miami ov N.E.) and now caps NFL Week 15 tonight. After winning the last two Mondays with Buffalo & Baltimore, this 37-year vet has CA$HED with 67% of his MNF ‘Magic’ plays in NFL 2020. “The winning continues” tonight with a 10* on Pittsburgh/Cincinnati. Your move!

$$ MNF Play Of the Month with Long term Power System $$

Start the week BIG with our MONDAY NIGHT FOOTBALL Game of the Month backed with a HUGE Analysis with a 100% Angle and a Cutting Edge system.

DO NOT MISS his NO DOUBT ROUT on Steelers v. Bengals if you want to GET PAID on Monday!

I was 5-2 on Saturday. I then went 4-2 on Sunday. Time to keep the momentum rolling on Monday, except this time I’m looking to break out the brooms!

Grab a piece of the good life. Join Tim’s team today, with an all-inclusive all sports membership!