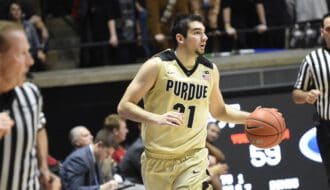 March Madness officially begins with conference tournaments getting underway tonight. There are some good matchups on the betting board for Tuesday night.

Our expert NCAAB handicappers take a look at some matchups and give their comp picks and predictions with analysis for Tuesday, March 5, 2019.

The Muskies are playing their best basketball of the year, winning five straight and also three straight on the Big East road.

Today, they catch significant points against a VERY average Butler team that is 1-4 L5 and allows conference opponents to shoot 54.7% inside the arc against them.

The first game was close, a 70-69 Xavier win but the Muskies have found another gear while Butler in in a tailspin. Xavier straight up.

Western Michigan should have no problem covering as a massive road dog against the Rockets. The Broncos kept it more than respectable in the first meeting between these two teams, losing by just 8 at home, despite Toledo shooting 52% from both the field and the 3-point line.

Big reason we are getting value with Western Michigan is they are just 2-14 SU in their last 16 games. This awful run has the books consistently inflating the line on the other side an it’s resulted in the Broncos going 4-0 ATS in their last 4.

Adding to all of this is a great system in play favoring the Broncos. Road underdogs of 10 to 19.5 points who are revenging a loss where they allowed 75 or more and off 2 covers where they lost straight up as an underdog are 68-32 (68%) ATS going back to 1997. Take Western Michigan!

I’ll take my chances with the Golden Gophers as a home dog against the Boilermakers. Purdue sits on top the Big Ten standings at 15-3 and have locked up a double-bye in the Big Ten Tournament. They also come in feeling really good about themselves after destroying Illinois (73-56) and Ohio State (86-51) in their last 2 games, both at home.

Minnesota is better than both of those teams and Williams Arena is one of the more difficult places to play in the Big Ten. You can see how much it has helped the Gophers, as they are 13-3 at home compared to 5-8 on the road.

Boilermakers are just 3-11 ATS in their last 14 road games when they enter the contest having won 12 or more of their last 15 games. They are also 4-12 ATS last 16 road games off a conference win. Minnesota on the other hand is a dominant 9-1 ATS last 10 at home off an upset win by 10 or more as an underdog.

This one is always a dog-fight even if they meet on the basketball court as opposed to the football field. But, unlike when they meet on the gridiron their basketball records are not as impressive as the Tigers are 4-8-1 ATS on the road and are 1-5 ATS in their last six.

Alabama is 1-5 ATS overall in their last six. The Tide play the better defense and with the home floor and whistles on their side get it done.