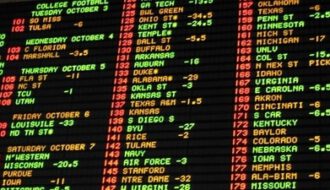 In order to prepare for the football season, I wanted to create an article for the new football bettor and start from the very beginning with the understanding of odds.

The football betting season brings excitement and the possibility of big profits from sports wagering.

This article will cover the very basics of NFL and college football odds with a main focus on the line and how to read it, to include the point spread and the total with example of each.

The point spread is created by the linesmakers and placed on a game for wagering purposes. The posted line will determine who the favorite is and who the underdog is.

The bettor will figure this out by adding or subtracting points to the final score. If the final score is Miami 20 to Dallas 10, then you have to subtract the point spread from the favorite to see if you have covered.

If in the situation above you bet on Miami, you would have won or ‘covered’ the bet. If you had wagered on Dallas, it would have been a different story.

In the example above the Dallas Cowboys are the underdog. They are getting three points in this game, which means you will add three points to the final score.

After adding the three points, if the score is greater than the score of the opposition, you will win your wager.

In the example above, I used the final score of Miami 20 to Dallas 10. If you had wagered on the Cowboys at +3, then this bet would be a loser. This is the basic fundamentals of the point spread.

When a bookmaker posts the point spread, they will also post a total on the game. Sometimes referred to an over/under. When a bettor plays on the total they are wagering whether the total of the game will go over or under the posted total.

For example the lines maker will post a total on the Miami/Dallas game of 38. Using the final of 20-10 again, the bettor that placed money on the under would be a winner.

The total of both teams scores when added together is just 30, which falls below the posted total of 38.

The bettor that placed money on the over would not have been a winner because the total of both scored combined did not exceed the posted number of 38. For the bettor that took the over to win the total score combined would have to add up to 39 or higher.

When concerning the point spread or the total when the number falls on the line or posted total this is a ‘push’ and no money is won or loss and the original wager is returned to the bettor.

These are the very basic fundamentals of understanding football odds. It is of the utmost importance that you understand these basics fully before making a wager.

It is not until you fully understand how these numbers work that you’ll be able to place a wager with confidence and have a chance of returning a profit betting on either the NFL or college football.

View the latest NFL odds and college football odds posted by the best sportsbooks on the internet.