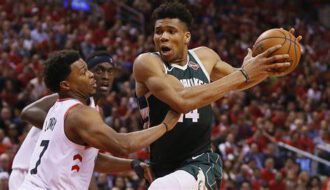 NBA Playoffs Game 4 of the Eastern Conference best-of-seven first round match-up between the (1) Milwaukee Bucks vs. (8) Orlando Magic at the ESPN Wide World of Sports Complex in Lake Buena Vista, FL.

Magic (+) over Bucks- The Bucks made short work of the Magic in Game-3 taking a 27-point half-time lead after having taken a 23-point lead in Game-2 certainly were aroused after their Game-1 loss a 25-point ATS loss. Milwaukee is 1-6 ATS after a straight-up win and Orlando is 5-1 ATS after a double-digit loss. Milwaukee’s Khris Middleton has been invisible the first three games, if he wakes up we might have a repeat of Games 2 & 3. But, the Magic are supposed to show up here. Take ORLANDO!

I am off to a HOT 14-8 NBA Playoff Start! I am releasing a 5 Unit BEST BET Monday in the Bucks/Magic Eastern Conference clash on NBA TV at 1:30 EST this afternoon! These 5 Unit plays are my *BIGGEST* releases on a daily basis, and this one is GUARANTEED or I’ll send you Tuesday’s NBA plays for FREE!

Get in on one of the BEST over/unders for sale on the site today for NBA. It’s my TOTAL DOMINATOR on Bucks v. Magic and it will “Totally Dominate!”

Since returning from lockdown, AAA Sports has been OUT OF THIS WORLD! First, they were 100% PERFECT in June! Now they’ve gone an UNFATHOMABLE 79-40 OVERALL the past 32 days!

NBA has led the charge with a 21-7 RECORD (75%) since the restart! Last night it was Denver “getting the money.” You don’t have to wait long for Monday’s winning ticket!

4-0 SUNDAY SWEEP! As if Power Sports wasn’t already *HOT* enough, he decided to “break out the broom” yesterday! Starting things off was Power’s 10* NBA Game of the Week on the Sixers! For the week, he ended up going a PERFECT 6-0 w/ TOP Plays (Sides/Totals) in NBA, MLB, NHL!

Starting things off Monday is this *EARLY* POWER-HOUR! Be there.

Join Marc David with his Spread on Bucks v. Magic!

Join Ryan Worden with his Spread on Bucks v. Magic!