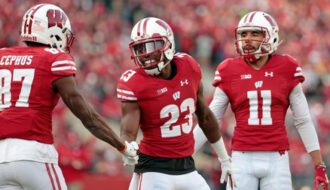 This Big Ten conference showdown is scheduled to start at 3:30 PM ET and will be televised on ABC.

Below is current odds and all available free picks and best bets for today’s college football game released by our expert handicappers.

The Key: Since crushing Maryland in their opener, this Northwestern offense has averaged just 294 YPG in their last 3 games. They are very fortunate to be 4-0 this season as they’ve gone 3-0 in one-score games. But now they take a big step up in competition here against a Wisconsin team that just blasted Illinois 45-7 and Michigan 49-11. The Badgers have one of their highest rated recruits in program history in Graham Mertz balling at quarterback. He is completing 74.4% of his passes with 7 touchdowns and zero interceptions. And the always stout defense is yielding only 9.0 PPG and 218.5 YPG. This is also a step up in competition for Wisconsin, but they should be more than 7.5-point favorites here. They were 22.5-point favorites over Northwestern last year for comparison’s sake and the Wildcats aren’t going to have any home-field advantage. I don’t think Northwestern is going to be able to muster up enough offense to stay within the number this year. The Badgers are 14-4 ATS in their last 18 games as road favorites. The Wildcats are 2-8-1 ATS in their last 11 home games. Take Wisconsin.

PERFECT 3-0 CFB this week (5-0 including free)! Sean’s RED HOT 9-2 CFB totals run continues with a 10* TOP RATED o/u winner on Saturday afternoon! Don’t even consider making a move on the gridiron before checking in with Murph first; punch your ticket now!

Looking to cash in big on the college gridiron Saturday? Destroy the books with Lee’s 40* WISCONSIN/NORTHWESTERN NCAAF SHARP STAKE!

Last week they were a PERFECT 7-0 ON THE GRIDIRON, Monday through Friday!

I have the BEST CFB INFO in the business and want to help you convert that into STRAIGHT CASH this weekend!

You can use this simple formula to win: sign up with me, follow my recommendations, and PROFIT!

Yes, it really can be THAT EASY!

BUY NOW for only $29.99 and I GUARANTEE we win or you get the next CFB card FREE!

This HIGHLY COVETED side awaits you and promises to be a ONE-SIDED BEATDOWN that leaves the sportsbooks totally embarrassed! Just like Power’s 10* NFL GAME OF THE YEAR, which saw Miami (+3.5) win OUTRIGHT by DOUBLE DIGITS!

Marc’s Top Rated 10* College Football Game Of The Week on Saturday’s card is another live dog he sees winning the game straight up. Best of all it’s not only backed an amazing 14-0 ATS Awesome Angle in the game, but also with both coaches in roles in which they have are 100% ATS perfect on and against. Hurry get it now – don’t miss out!!

Chip Chirimbes the ‘Big Game Player’ and Las Vegas Hilton Handicapping Champion after EIGHT straight winning Saturdays is looking to rebound from a 2-4 college week. Saturday, Chip is releasing his ‘Guaranteed’ Big Ten Power Play winner between Wisconsin and Northwestern. Cash-in on Chip’s ‘Guaranteed’ Power Play Best Bet winner for only $39 or as part of Chip’s Game of Year Package.

Higgs is up with a MONEY MAKER in Big 10 action. Wisconsin faces Northwestern and Sean has your WINNER up now!

Check out all available ncaaf best bets released by expert cappers every day during the 2020-21 season.