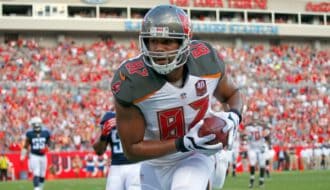 Monday Night Football is scheduled to start at 8:15 PM ET and will be televised on ESPN.

Monday NFL Free play. My selection is on the ‘over’ between Tampa Bay and New York at 8:15 pm et on Monday.

I’ll take a shot with the ‘over’ in Monday Night Football. I don’t expect either team to waste a great deal of plays trying to run the football in this one as both run defenses have been stout. That should open things up for plenty of passing plays, and I’m confident both sides can enjoy some success in that regard. Bucs QB Tom Brady isn’t likely to be pressured all that much in this one as the G-Men pass rush has been non-existent. While he is without WR Chris Godwin, the Bucs have plenty of depth in terms of their aerial attack. Meanwhile, the Giants receiving corps has gotten healthier in recent weeks with Sterling Shepherd back in the mix to compliment Darius Slayton, who has enjoyed a bit of a breakout year. This is obviously a big game for the 1-6 Giants, who should be a forgotten team the rest of the way. While the ‘under’ has been the way to go on Monday Night Football this season, I’ll go the contrarian route here and call for a higher-scoring game than expected. Take the over (8*).

Sean is coming off a RED HOT 6-1 weekend across the board, keyed by a CFB SWEEP and a WINNING NFL Sunday! His 17-7 NFL big ticket run is on the line tonight as he targets his 10* NFC Game of the Month for November featuring the Bucs vs. Giants on ESPN! Your best bet is a weekly or monthly subscription package, giving you access to ALL of Sean’s winners every day!

The set-up: The Bucs are rolling right now, as they come in off back-to-back blowout wins over the Packers and Texans. Tom Brady is performing at an unbelievably high level (1,910 passing yards and 18 TD’s. On pace for 41 TD’s this year.) The Giants have struggled with offensive consistency, but they do remain competitive, having lost their last three games by three points or less. New York won’t go down without a fight in my opinion, as I look for Joe Judge to open up the playbook today. Situationally, this one definitely sets up as more of a “shootout” than “chess match” in my opinion.

The pick: Note as well the total has gone “over” in five of New York’s last seven at home, in eight of Tampa’s last 11 on the road and in all five of these team’s last five against each other. This number is a tad low, consider the “over.”

This is a 1* FREE PLAY on the OVER Bucs/Giants.

Don’t miss out on your chance to cash in big on Monday Night Football with Lee’s 40* BUCS/GIANTS MNF VEGAS INSIDER!

Sean delivered an AWESOME 6-1 weekend including a WINNING NFL Sunday! His 17-7 NFL big ticket run continues with his 10* NFC Game of the Month for November featuring the Bucs vs. Giants on MNF; hop on board now!

I have a simple formula to help you BEAT THE NFL: sign up for this package, follow along, and PROFIT!

Matt is ready for a strong finish in the NFL as we close Week Eight with the matchup between the Buccaneers and Giants! He brings in a SOLID 10-6 Primetime Run into Monday Night and his +$33,015 NFL run is extended here as he keeps the Primetime SURGE rolling along!

To say that Mike came out flat with his premium picks on Sunday would be an understatement. It’s not how far you fall, but how high you bounce that counts though, and you better believe that Mike is set to get revenge with this MONDAY NIGHT BOOKIE BU$TER release.

Don’t miss out on a golden opportunity to build your bankroll with Steve’sBucs/Giants NFL Sharp Money Top Play ($34.95)!

Let’s CASH IN on Bucs v. Giants and MAKE SOME MONEY Monday. It’s easy, BUY THIS PACKAGE, follow along, and COLLECT your profits!

If you are looking for the BEST BET in NFL for Monday then this is the ONE! Sal’s 10* Platinum Club Play is as STRONG AS IT GETS and it goes on Bucs/Giants!

Nobody and I mean NOBODY DOMINATES the NFL like Bobby does and he is LOCKED and LOADED to do so again on Monday!

Simply put, his 6-2 (75%) run over his last 9 football picks has left clients HAPPY and bookies on tilt!

If you think it’s time to WIN SOME MONEY on Monday then it’s time to you get signed up for my 5* NO BRAINER on Bucs v. Giants!

Get in on one of the BEST over/unders for sale on the site today for NFL. It’s my TOTAL DOMINATOR on Bucs v. Giants and it will “Totally Dominate!”

I have gone 11-3 L2 Weeks in the NFL to improve to a 35-23 NFL Start to the 2020 season! I am releasing a 5 Unit BEST BET Monday in the Bucs/Giants NFC showdown on ESPN at 8:15 EST tonight! These 5 Unit plays are my *BIGGEST* releases on a daily basis, and this one is GUARANTEED or I’ll send you my next day of football plays for FREE!

Jack is the KING of Monday Night Football with a 51-27 MNF Run over his last 88 releases! He is also on a 49-27 NFL Totals Run after cashing in the Bears/Rams UNDER 45.5 last Monday! He comes back with his 20* Bucs/Giants ESPN No-Brainer for just $39.95 this Monday! He has the winning over/under in this game NAILED tonight behind a PROVEN 41-14 Totals System in his analysis!

GUARANTEED or or the next day of football is ON JACK!

Last week was a BLOWOUT WINNER with the Rams, October’s TOP MNF side! This week’s battle between the Bucs and Giants will be November’s TOP MNF Total! Make plans to join as AAA continues to make HISTORY!

When all of my sources, contacts, systems, and stats agree on a game it’s usually BIG! We have that situation tonight on Bucs v. Giants and it’s a game you are not going to want to miss out on!

It’s Monday Night Football and Jim Feist IS the King of Monday Nights. Tonight we have the Tampa Bay Buccaneers vs the NY Giants. Jim has your winner for you in this game at this special price. Join a Vegas betting veteran with over 48-years of winning experience and WIN with JIM on Monday Night.

Cappers Club is on an impressive 49-34 (59%) run over their last 86 NFL picks! Join the same handicapper that has made $1,000/game bettors $10,090 since September 30, 2018 with their Spread on Bucs v. Giants!
The Cappers Club is here to make you a smarter sports bettor! As always, “The Club’s” plays come GUARANTEED! You will profit or the next day is FREE!

The Tampa Bay Buccaneers visit the NY Giants in Monday night Football action. Which side of the Total will the combined score fall on? Your 100% Guaranteed answer is locked and loaded and ready to make the books pay for taking our action. Kick off after 8:20 pm et

Monday night Football HEADLINES and Rob tags this Game with a 6* TOP Rated Status. The game has a 71-29 all purpose system and a Monday night Specific System that has NEVER LOST dating back to 1980. Our team has a perfect angle. Start the week BIG in football. As an ADDED BONUS is a MIDNIGHT Delight in KBO PLAYOFF ACTION

Power Sports won his *10* NFL GAME OF THE YEAR (MIAMI) on Sunday! While it was kind of ugly, the Dolphins got the OUTRIGHT WIN!

DO NOT MISS his NO DOUBT ROUT on Bucs v. Giants if you want to GET PAID on Monday!

Marc’s Monday Night Key Play is locked and loaded with no less the three 100% ATS perfect winning situations inside the game that are 16-0 ATS. Don’t make a move on the game until you what they are. Get it now!

I’m 33-23 so far in the NFL (+$7,500 in profits for $100 bettors!) and I’m absolutely gearing up for an INCREDIBLE month! In fact, I’m ready to make this a NOVEMBER TO REMEMBER! Get in on the “ground floor,” as I’m expecting another MASSIVE all sports run through the Holidays – you know EXACTLY what to do!

Will EASILY hit both his NFL and CFB “GAME OF MONTH” picks in October. He’s now playing with “HOUSE MONEY” in both the NFL and College Football after going 3-0 w/ NFL to open November (also hit NFL “TOTAL OF YEAR” on Sunday!)

Check out all available NFL best bets released for Monday night and every week during the 2020-21 season.