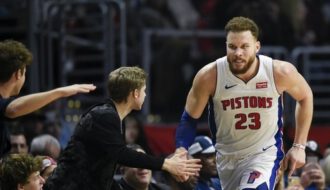 It’s the start of a new week with an nine-game NBA betting card for tonight.

We are in the final stretch-run of the regular season with just a few weeks left until the post-season begins, which means teams will be positioning for the playoffs, while other teams continue to tank for the lottery.

There are a few matchups on the board with value for profits to be made.

Below you will find featured NBA picks, predictions and analysis for Monday, March 18th, 2019 from our expert handicappers.

Few teams are playing as well as the Detroit Pistons over the past month-plus. The Pistons are 14-4 SU & 13-5 ATS in their last 18 games overall.
They should make easy work of the Cleveland Cavaliers tonight as well.

It’s a Cavs team that is really banged up right now playing without Nance Jr, Thompson, Dellavedova, Smith and Henson, and they could be without Love tonight, who is questionable.

The Cavs have lost five of their last six and will have a hard time being competitive with all these injuries. Give me the Pistons.

The Boston Celtics have won five of their last six but have their work cut out for them Monday night as the Denver Nuggets, one of the best from the West, will pay a visit to TD Garden.

The Nuggets have allowed an average of just 102 ppg through a three-game winning streak and under is 10-1 in their last 11 overall.

The Celtics are coming off four high-scoring contests as they’ve been beating up on teams with losing records, but under is 6-0 in Celtics last six games vs. a team with a winning % above .600.

Celtics’ center Al Horford and forward Gordon Hayward both got banged up in Saturday’s win over Atlanta. Horford (knee) is listed as probable while Hayward has been placed in the concussion protocol and is doubtful to play against Denver.

Over is 5-1 in the last six meetings, but note that under is 11-5 for Denver in road games where the total is greater than or equal to 220. I think this will be a relatively low-scoring contest.

The Oklahoma City Thunder are really scuffling right now. They are just 5-9 SU & 3-11 ATS in their last 14 games overall. And things just got even more difficult for them tonight as Russell Westbrook has been suspended for this game after receiving his 16th technical foul of the season.

The Miami Heat are trying to cling on to the 8th and final playoff spot in the Eastern Conference. They are just one game ahead of the Orlando Magic. The Heat have done an excellent job here down the stretch by going 7-3 SU & 7-3 ATS in their last 10 games overall.

The Heat have actually done their best work on the road this season, going 21-11 ATS in their 32 road games. Miami is also 21-11 ATS as an underdog this season.

The Heat are 23-7 ATS in road games after playing two consecutive home games over the last three seasons.

The Thunder are 0-8 ATS in home games off an upset loss by 10 points or more as a favorite over the last two years.

The Bulls will also be playing for a second consecutive day after losing in Sacramento last night, so it’s a tough situation for them. Chicago is 3-11 ATS off 2 consecutive road games this season.

For all plays and predictions with analysis for Monday night, visit the free NBA picks and expert NBA picks pages.