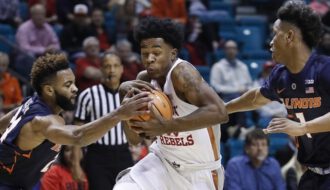 Conference tournaments continue tonight with major conferences ready to tip off the 1st round.

There are teams that will need a good showing this week for a chance to get in the Big Dance that will start next week. Other teams will be positioning themselves for a better seed and an easier path to the Final Four.

Wednesday night offers some great matchups with betting opportunities up and down the card.

Our expert handicappers give their free NCAA basketball comp plays and predictions with short writeups for March 13, 2019.

Click on a handicapper’s name to view their page with more top plays, predictions, subscriptions, handicapping records and more.

I’ll take my chances here with the Fighting Illini at basically a pick’em against in-state rival Northwestern. These two teams split there two regular-season meetings, but it was Illinois who covered both times.

Illini lost by just 2 at Northwestern as a 7.5-point dog and won by 5 as a 4-point home favorite. That’s now 8 straight covers in the series for Illinois and I think they make it 9 straight without much problem.

I just feel the line here is a bit low due to the fact that Illinois comes in off a couple of ugly losses to end the year against Indiana (92-74) and @ Penn State (72-56). Those are two of the hottest teams in the conference outside of the elite teams at the top, so there’s every reason to expect Illinois to bounce back.

Northwestern on the other hand is a mere 1-11 in their last 12 games and leading scorer Vic Law is questionable, as is third leading scorer Ryan Taylor. They only have 3 guys averaging double-figures. Give me the Fighting Illini -1.5!

The St. John’s Red Storm were in the NCAA Tournament a couple weeks ago. But now they’ve played themselves onto the bubble by losing 3 straight to fall to 20-11 on the season. If they lose to DePaul today, they’ll certainly be out.

They need a win, and they’ll be extra hungry having already lost to DePaul twice this season. They probably took them lightly, but they won’t be taking them lightly tonight.

This is a home game for St. John’s playing inside Madison Square Garden. The Blue Demons are 6-20 ATS in their last 26 neutral site games. Take St. John’s.

Panthers (+) over Orange. Some conflict here between these two rivals who have both had disappointing seasons.

Outright victory? Almost assuredly not. However, I think we’ll see a much tighter battle than what the oddsmakers are trying to lead us to believe this evening.

Oregon comes into the Tournament having won four straight, while WSU enters having lost five in a row.

The Cougars though do play with the added incentive of “double revenge” here as they look to avoid three straight losses to the Ducks this season.

It’s difficult to beat a team three times in one season (in any sport), despite the discrepancy’s in talent level. And at 19-12, Oregon isn’t considered a “great” team by any means.

WSU has in fact performed decently in this spot for bettors as well, going 7-2 ATS in its last nine in revenging a home loss vs. an opponent of ten points or more.

Oregon has been a disaster in this position though, going just 2-9 ATS in its last 11 as a neutral court favorite or pick.

I think the revenge minded Cougars and all these points are worth a second look on Wednesday night.

For all free plays and predictions for Wednesday night, take a look at the free NCAA basketball picks page.