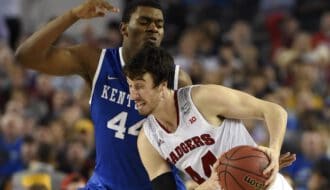 Conference tournaments continue on Thursday night as we head closer to the NCAA tournament in the coming weeks.

Teams are looking to make a good showing in their conference tourneys to make a last push at a tournament berth or lock up a better seed.

There is a nice sized betting card in store for tonight, while the NBA has just 2 games on the board.

Our expert NCAAB handicappers give their top free comp plays and predictions with analysis for Thursday, March 7, 2019.

I’ll take my chances here with the Hawkeyes covering as a big 8-point road dog against the Badgers. I just feel there’s too much value with Iowa at this price.

Sure the Hawkeyes haven’t looked good in their last two games, but we know this is a quality team and is not just capable of keeping it close against Wisconsin, but winning the game outright.

Not only has Iowa lost their last two, they have failed to cover 6 straight. No question that is playing into the inflated number. As is this being senior night for Wisconsin.

What is getting over looked is the Badgers have not been equally bad against the number, going 1-5 ATS in their last 6.

The biggest thing for me is the first meeting between these two. Badgers won 72-66 at Iowa as a 2-point favorite. They only won by 6, despite them shooting 48% and holding the Hawkeyes to 39% shooting.

Chances are Wisconsin fails to shoot as good as they did in the first meeting and chances are Iowa shoots better. Give me the Hawkeyes +8!

Indiana has gone a dismal 1-7 straight up in their last 8 conference away games. Indiana is coming off 2 straight wins with both contests being played at Assembly Hall in Bloomington.

However, the Hoosiers are 1-8 ATS in away games throughout the past 2 seasons after playing their last 2 contests at home. Indiana was outscored by an average of 13.3 points per game during those 9 road appearances.

By the way, you may be surprised to know that despite their losing record Illinois has quietly gone 5-1 straight up over their last 6 conference home games.

Bet on Illinois minus the small number.

The Colorado Buffaloes have one of the best home-court advantages in the Pac-12. They are 11-2 SU & 9-4 ATS at home this season, outscoring opponents by 11.2 points per game. They are 4-0 SU & 4-0 ATS in their last four Pac-12 home games heading into this showdown with UCLA tonight.

Colorado already beat UCLA 84-73 on the road in their first meeting this season on February 6th. They simply have the Bruins’ number over the past two seasons, going 3-0 SU & 3-0 ATS with three upset victories, including two at UCLA. Look for their dominance in this series to continue tonight.

UCLA is getting too much respect from oddsmakers off three straight home wins that were all decided by 7 points or less. Now they’re back on the road, where they were last seen losing by 24 at Stanford. The Bruins are just 3-7 SU & 3-6-1 ATS in all games played away from home this season.

UCLA is 1-7 ATS as an underdog this season. The Bruins are 2-9 ATS in road games off two or more consecutive wins over the last two seasons.

UCLA is 1-9 ATS vs. good rebounding teams that average 4-plus boards more than their opponents this season.

The Buffaloes are 6-1 ATS in their last seven games vs. a team with a winning record. Bet Colorado Thursday.

The Hawaii Rainbows travel to UC Davis to take on the Aggies on Thursday night. Hawaii is 16-12 SU overall this year while UC Davis comes in with an 11-17 SU overall record on the season.

Thanks and good luck, Rocky.

Take a look at free NCAA basketball picks for all college basketball comp plays and predictions for Thursday.