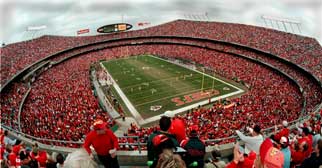 Following Thursday night’s opener, the rest of the teams are scheduled (as of now) to get underway with a full schedule of 13 games on Sunday, September 13th and two games on Monday, September 14.

Hopefully the coronavirus doesn’t wreak havoc in the next few weeks and the season starts as scheduled.

Take a look at some early betting odds and featured picks for NFL Week 1 by our expert handicappers below.

The 2020 season debuts with the rematch from last year’s Divisional Round matchup in which the Chiefs blew out the Texans, 51-31, after trailing by 24 points in the second quarter, only to score 41 unanswered points on seven consecutive drives.

With defending Super Bowl champions just 1-6-1 UNDER on Thursdays the past five seasons, as well as 3-9-1 UNDER in home openers since 2007, we’ll take advantage of a very popular public line and go UNDER the total in this game.

We recommend a 1* play on UNDER the total.

Despite the Panthers having home field advantage, the Raiders are currently slight favorites. While that may have some leaning towards the home underdog, the Raiders are favored for a reason.

Carolina has a new head coach, a new offensive coordinator, a new defensive coordinator and a new starting QB. Under normal circurmstances, that might not be such a bad thing. After all, everyone is surely hungry to get the new era started with a win.

However, these circumstances aren’t normal. Due to the pandemic, the team hasn’t had a chance to get together and that is likely to make adjusting to all the new faces/schemes difficult.

The question of whether or not Tom Brady is “washed up” will be answered after the first few weeks of the 2020/21 season and there’s no question that TB faces a stiff test right out of the gate by traveling to division rival New Orleans in Week 1.

Brady has plenty of weapons to utilize, but team chemistry, especially with what is predicted to be a shortened pre-season, is not something that can be achieved over night.

Drew Brees may have put a foot in his mouth back in early June, but the veteran QB quickly made amends with his teammates and the media and I think that the entire ordeal he went through will in fact just “add fuel to the fire.”

Time is running out for both Brees and Brady, but the Saints’ pivots numbers remain solid, while TB’s have dropped off significantly the last few years.

Divisional contests are always the most important for a team and they almost always mean more to the home side. This is one of the most anticipated games of the season and I look for New Orleans to come prepared. I’m laying the points and expecting a rout.

1* on the New Orleans Saints.

Be sure to check out the premium NFL picks section for top rated and best bet selections released weekly by our experts, so you can win your football bets more consistently during the season.