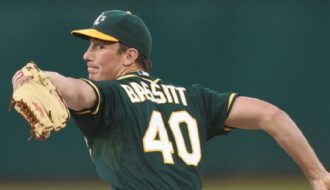 The last Saturday of August is upon us with 18 games, including 3 doubleheaders scheduled for today. With a large card like this, there’s always plenty of value to be found and bets to be made.

View 5 expert MLB picks and predictions with analysis for Saturday, August 29, 2020 released by our baseball betting experts below.

Check out the most profitable MLB handicappers to see who’s been best for the week, month and baseball season.

The Chicago Cubs are just 5-10 in their last 15 games overall and struggling.

The Cincinnati Reds have won three straight while scoring at least 6 runs in all three.

Yu Darvish is 0-2 with a 5.54 ERA in his last two starts against the Reds while allowing 8 earned runs and 4 home runs in 13 innings.

Give me the Reds in Game 1.

The Houston Astros (17-14) are no longer the juggernauts they were before now that they’re not cheating, and plus they have lost their top 2 starters from last year in Cole and Verlander.

The Texas Rangers have been a good bet at home this season, especially with ace Lance Lynn on the mound. I’ve cashed on him a number of times already in 2020 and I’ll continue to ride him until he gets the respect he deserves.

The Pirates are worth a look as a big road dog in Saturday’s NL Central matchup with the Brewers.

Pittsburgh lost the series opener 9-1 on Friday, but are still a very respectable 5-3 over their last 8 games.

With the win Milwaukee is only 3-6 in their last 9. They scored 9 runs on Friday, but only managed 8 hits. They haven’t had double-digit hits in a game since 8/19.

The Colorado Rockies and the San Diego Padres combined for 14 runs in the opener of this series on Friday. I expect to see another high-scoring affair in this one.

Colorado right-hander Antonio Senzatela (3-1, 3.96 ERA) was lit up for six runs on seven hits (four homers) in an 11-3 loss at Dodger Stadium last time out. Returning home to Coors Field might not be what he needs to regain his confidence as he has posted a 4.50 ERA in two home starts on the season and the Padres are hitting .257(6th) off right-handers.

San Diego left-hander Adrian Morejon (0-0, 5.79 ERA) has made just two starts for a total of 4 2/3 innings. Last time out, Morejon gave up three runs in 1 2/3 innings against Houston. This looks like a tough spot for the 21-year-old as Colorado is hitting a solid .278 (7th) off southpaws on the season.