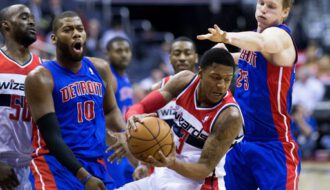 The beginning of the weekend is here with an eight-game NBA betting card for tonight.

With just a few weeks left in the regular season, teams will be positioning themselves for a playoff run, while other teams continue to be in tank mode.

There are some good matchups with value opportunities for solid profits to be made.

Below you will find featured NBA picks, predictions and analysis for Friday, March 15th, 2019 from our expert handicappers.

This is a huge game for both teams as they try to chase down Southeast Division rival Miami Heat who currently own the final playoff spot in the Eastern Conference.

The Hornets took a 118-106 defeat in Houston on Monday night and have dropped 11 of their last 15 games. They are just 3-13 ATS in their last 16 road games vs. a team with a winning home record and will face a Washington team that is a solid 20-12 SU (21-11 ATS) home at Capital One Arena and coming off back-to-back home wins over Sacramento and Orlando.

“We fought, we didn’t have everything going for us offensively, but I thought in that fourth quarter we did a good job,” Washington coach Scott Brooks said following Wednesday’s 100-90 win over the Magic, another division rival chasing the No. 8 spot. “They only had four offensive rebounds in that second half.”

The Wizards have covered the spread in six straight games, a narrow 112-111 loss as a 4.5-point underdog at Charlotte last Friday included. I think they’ll be extremely fired up here looking to avenge that loss, and I’m well happy to back the home team in this matchup.

The Sacramento Kings are coming off a tough 120-126 loss in Boston last night. Now they’ll be playing for a second consecutive day and won’t have much left in the tank tonight against the Philadelphia 76ers.

This is a dangerous 76ers team now that has gotten healthy with Joel Embiid returning to the lineup, and they are 2-0 since his return with the two wins coming by a combined 24 points.

This is a fresh 76ers team as they coming in on two days’ rest. Give me the 76ers.

The NBA Totals play is on the Over in the Milwaukee at Miami game at 8:05 eastern.

This game applies tom a solid database system we use that plays over for rested home dogs that covered as a home favorite and allowed 80 or less like Miami vs an opponent like Milwaukee that covered on the road and scored 120 or more.

The San Antonio Spurs are 6-0 SU & 5-1 ATS in their last six games overall since returning from their Rodeo Road Trip. And now they come in on two days’ rest and should make easy work of the New York Knicks tonight.

The Knicks are obviously tanking, sitting at 13-55 with the worst record in the NBA. They have now gone 0-7 SU & 2-5 ATS in their last seven games overall with six of the seven losses by 7 points or more.

The Spurs are 16-7 ATS in their last 23 home games. San Antonio is 11-4 ATS in its last 15 vs. Eastern Conference opponents. Bet the Spurs Friday.