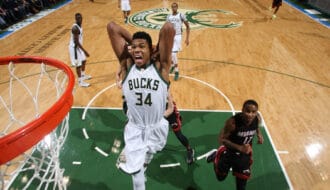 NBA Playoffs Game 3 of the Eastern Conference best-of-seven first round match-up between the (8) Orlando Magic vs. (1) Milwaukee Bucks at the ESPN Wide World of Sports Complex in Lake Buena Vista, FL.

The series is tied 1-1 after a 111-96 and (against the spread) win by the Bucks on Thursday. Game will be televised on TNT.

The last time Power Sports released a 3-Game NBA report was Wednesday. The result was a 3-0 SWEEP as Brooklyn, Utah & Dallas combined to cover the spread by 46.5 points! Get ready to “break out the broom” yet again as Power is thinking S-W-E-E-P on Saturday!

Sean’s 4-1 NBA totals run continues with a 10* TOP RATED o/u winner in EARLY afternoon action on Saturday! Hop on board now and make plans to COLLECT before dinner!

I am off to a HOT 10-5 NBA Playoffs Start! Come bet with a FORMER NBA WORLD CHAMP in pro hoops all day long and get your hands on my Saturday NBA 4-Pack for $49.99! This card features FOUR 5 Unit BEST BETS in the Bucks/Magic, Pacers/Heat, Rockets/Thunder & Lakers/Blazers games! You are GUARANTEED-to-PROFIT or I’ll send you Sunday’s NBA plays for FREE!

I am off to a HOT 10-5 NBA Playoffs Start! I am releasing a 5 Unit BEST BET Saturday in the Bucks/Magic Eastern Conference clash on TNT at 1:00 EST this afternoon! These 5 Unit plays are my *BIGGEST* releases on a daily basis, and this one is GUARANTEED or I’ll send you Sunday’s NBA plays for FREE!

Ryan has started off the NBA playoffs winning 64% ATS and has this Titan Best Bet to unload with confidence Saturday afternoon. The report features powerful facts and includes a 8-0 ATS machine learning metric that has covered the spread by an average of 17 points. He went 24-12 for 67% ATS last playoff season and is once again well on his way to another big season. Currently 346-268 (56%) over his last 632 basketball picks! $1,000/game bettors have made $56,310 by following his advice!

Unload on your bookie with Jeff’s BUCKS/MAGIC *SIDE & TOTAL PACKAGE*!