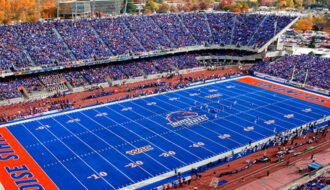 This Mountain West conference clash is scheduled to start at 8:00 PM ET and will be televised on FS1.

Below is current odds and all available free and premium for tonight’s NCAAF game released by our expert handicappers.

The College Football Comp Play is on the under in the Colorado St at Boise St game at 8:00 eastern. Expect a much better showing here by Boise than we saw last Friday in their blowout loss to Byu. The Broncos are 25 of 36 under here and 7 of 8 under after allowing 280+ pass yards. They are 4-0 under on Thursdays. The Rams are 10 of 11 under vs a winning team, 5 of 5 after rushing for 100 or less yards and 5 of 7 under off a loss. Look for this game to stay under 61. On Thursday we have our AFC South Game of the Month going in the NFL along with another Top Afternoon Soccer Total.For the Comp Play go with the under in the Colorado St at Boise St game. Rob V- GC Sports

I’m going to take my chances here with Colorado State as a two touchdown dog against the Broncos. This is a bit of a tough handicap, as Boise State isn’t really saying who is going to be available to start at quarterback.

The starter coming into the year was Hank Bachmeier and if he’s healthy he will start, but he’s missed the last two for undisclosed reasons (probably covid, which means he should be back for this one). Backup Jack Sears, who played well in their win over Air Force was hurt (concussion) early in last week’s loss to BYU. The line to me suggests the books believe Bachmeier or Sears will be available.

Regardless if Bachmeier or Sears play, they won’t have the services of starting running back George Holani, who is out with a knee injury. They got some other guys, but this is not nearly as good a running team without Holani.

Boise State’s defense has also not played well. The Broncos defense was expected to be good and looked the part in a 42-13 win to open the season vs Utah State. That dominant defensive effort looks less and less dominant the more we see of Utah State. The Aggies only scored 7 in their next game at home against San Diego State and 9 the following week at Nevada.

When they needed their defense the most last week against BYU, they couldn’t deliver. Boise State allowed 51 points and 573 yards to Zach Wilson and a high-powered Cougars offense. BYU is going to do that to a lot of teams, but the Broncos couldn’t stop Air Force the week before, giving up 30 points and 484 yards.

Colorado State managed just 17 points in a 38-17 loss to open the season at Fresno State. Then out of nowhere put up 34 points on a good Wyoming defense in a 34-24 upset win. What was different?

The Rams made a switch at starting QB, replacing junior Todd Centeio with senior Patrick O’Brien. Not sure why O’Brien wasn’t the starter to begin with. Centeio completed just 10 of 23 passes in his start vs Fresno. O’Brien went 18 of 26 for 255 and 2 scores. He also added a rushing TD.

That wasn’t the only difference. Colorado State got back wideout Dante Wright, who missed their first game. Wright had 10 receptions for 146 yards. Wright gives them quite the 1-2 punch with stud junior tight end Trey McBride, who had 5 for 90 and 2 scores vs Wyoming.

I think Colorado State is going to be able to score and if the defense plays anything like it did against the Cowboys (6 Sacks, 14 TFL, 3 TO), they just might win this game outright. Give me the Rams +14!

Looking to cash in big on Thursday Night Football? Get your hands on Lee’s 50* COLTS/TITANS NFL *BEST BET* TOP PLAY!

Before Boise’s anticipated showdown with BYU last week it was announced starting QB Hank Bachmeier would miss his 2nd game under the Covid Protocol. After backup Jack Sears left with a concussion, BYU destroyed Boise State 51-17. Unfortunately for Colorado State, Bachmeier appears ready to go and Boise will be itching to get the bad taste out of their mouths.

Boise State won’t have star running back George Holini for this one but backup Andrew Van Buren has shown he’s a very good running back himself, running wild on Air Force before being bottled up by BYU thanks to the QB issue. With Bachmeier back and throwing the ball downfield to the Broncos skilled wideouts there should be wide open lanes for Van Buren.

Colorado State returned QB Patrick O’Brien from their 4-8, 2019 season but they have a new coach, new skill position starters and a suspect offensive line. The Rams will be able to put some points against Boise State’s secondary but it won’t be enough to matter as I expect Boise’s offense to put up a huge number at home in front of their fans to make up for the dud against BYU. I’m Betting The Broncos. The Pick: Take Boise State.

Buy a 3-Day All Sports Subscription to get Tonight’s Total On Colorado State/Boise PLUS all CFB and NFL Games Ryan releases this weekend for $99.95

Unload on your bookie with Jeff’s COLORADO ST/BOISE ST *SIDE & TOTAL PACKAGE*!

Unload on your bookie with Thursday’s 4-Pack of Profits (2 NFL, 2 NCAAF)!

Don’t touch the RAMS/BRONCOS total until you’ve checked in with Ben Burns first!

Hunter’s ALL SPORTS 3-for-1 Thursday CASH!

Very few cappers are capable of PRODUCING CASH for their clients at the rate I have been!

Sign up for this package and WIN AGAIN on:

BUY NOW for only $49.99 and I GUARANTEE we win or you get tomorrow’s picks FREE!

Hunter’s ALL SPORTS 3-for-1 Thursday CASH!

Not many cappers have been PRODUCING STRAIGHT CASH for their clients as I have!

Buy this package now and WIN AGAIN on:

BUY NOW for only $49.99 and I GUARANTEE we win or you get tomorrow’s picks FREE!

I have the BEST CFB INFO in the business and want to help you convert that into STRAIGHT CASH this weekend!

You can use this simple formula to win: sign up with me, follow my recommendations, and PROFIT!

Yes, it really can be THAT EASY!

BUY NOW for only $29.99 and I GUARANTEE we win or you get the next CFB card FREE!

Don’t miss out on a golden opportunity to build your bankroll with Steve’sColorado State/Boise State NCAA-F Sharp Money Top Play ($34.95)!

This can’t miss premium play is GUARANTEED TO PROFIT or the next day of NCAA-F is FREE!

Whatever you do, don’t touch tonight’s RAMS/BRONCOS game until you’ve checked in with Ben Burns first!

Today I have SOMETHING SPECIAL for you!

When all of my sources, contacts, systems, and stats agree on a game it’s usually BIG! We have that situation tonight on Colorado State v. Boise State and it’s a game you are not going to want to miss out on!

Cash in big with my NO LIMIT PLAY in NCAA-F and see how easy sports betting can be.

AAA Sports has been DOMINANT ever since returning from lockdown! They are now on a $40,180 ALL SPORTS RUN, thanks to a 4-0 record since Monday! That PERFECT start to the week includes a 3-0 mark in College Football!

Not only is AAA hitting 75% with totals in NFL so far, they are winning at that same percentage with NCAAF totals the L4 weeks!

2018 World Handicapping Champion! Sal went 916-775 for a profit of 11,839 units making the most money for his clients than any other handicapper on this site!

The money keeps piling up on Thursday as Sal has his 2-Play ALL-ACCESS PASS for just $59.95!

It’s time to sign up and START WINNING while knowing this package is GUARANTEED TO PROFIT or else you get tomorrow’s picks on Sal!

If you are looking for the BEST BET in CFB for Thursday then this is the ONE! Sal’s 10* Platinum Club Play is as STRONG AS IT GETS and it goes on Colorado State/Boise State!

Get in on one of the BEST over/unders for sale on the site today for NCAA-F. It’s my TOTAL DOMINATOR on Colorado State v. Boise State and it will “Totally Dominate!”

Chip Chirimbes the ‘Big Game Player’ and Las Vegas Hilton Handicapping Champion was 4-5 in NCAA last week including 1-4 on Saturday and is now a ‘Documented’ 34-14 (71%) the past NINE Saturdays. Thursday, cash-in on this ‘Guaranteed’ Chip shot Best Bet winner between Colorado State and Boise State for only $39.

Faxon’s Thursday ALL SPORTS 2-FOR-1!

Don’t miss out again! Cash in on the following games:

I finished No. 4 overall the first year I was on the network in 2018! I haven’t let up since as I keep putting it to your book!

I GUARANTEE A PROFIT or you’ll get every play I release tomorrow FREE!

Faxon’s Thursday ALL SPORTS 2-FOR-1!

The Colorado State Rams visit the Boise State Broncos on the Blue carpet this Thursday night in MWC College Football action. Join me for tonights side winner and until the National Champs are crowned and watch your ROI go through the roof! Tests 41-29 59% CFB Side run! Kick off after 8 pm et

Will Rogers has been playing with “HOUSE MONEY” on the College Gridiron since DAY 1 this year and he’s ready to UP THE ANTE on Thursday night! Over?! Under?! Get on board, OR GET OUT OF THE WAY!

Last Saturday, Power Sports suffered his 1st loss with a NCAAF total in a LONG time. He did make up for it by going 2 for 2 w/ NFL Totals!

But losses never sit well with Power. Therefore, his next NCAAF total (on Thursday’s Colo St-Boise St matchup) is a BIG one! Watch (on FS1) as Power runs his NCAAF totals mark to 12-1! You in?

Do you want to GET PAID on Thursday? Then DO NOT MISS his NO DOUBT ROUT on Colorado State v. Boise State!

Check out all available top rated NCAAF picks released by our college football experts every day during the 2020-21 season.