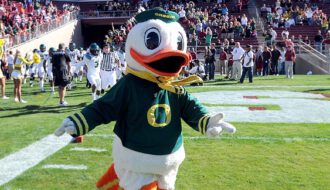 2020 NCAAF Week 12 matchup between UCLA Bruins vs. Oregon Ducks at Autzen Stadium in Eugene, OR.

This Pac-12 conference showdown is scheduled to start at 3:30 PM ET and will be televised on ESPN2.

Below is current odds and all available free picks and best bets for today’s college football game released by our expert handicappers.

Chip Chirimbes the ‘Big Game Player’ and Las Vegas Hilton Handicapping Champion’s 8-week Saturday win streak came to a crashing halt and now is a ‘Documented’ 37-18 (67%) the past 10 college weeks. Cash-in on Chip’s HIGHEST-RATED’ Big Ten Game of the Year between Iowa and Penn State and two Best Bets with his Money Game winner between Cincinnati and Central Florida and his Power Play between Wisconsin and Northwestern. Get Chip’s Guaranteed to ‘Profit’ Game of Year-Triple-Play of Best Bets only $99.

Bruins (+) over Ducks- This game falls into the ‘They Owe Me’ and not because of a loss. Last week ‘we’ were prepared to use UCLA in a great spot against Utah and the cancelled the game and then to really throw crap at us the snuck in a 9:00AM Sunday game against California as they had 43 hours notice and won easily (how does that happen?). Now, Oregon has been flawless coming back from a 19-7 deficit just before halftime last week to defeat Washington State (and us) and they keep rolling straight-up anyway mas they are 6-14 ATS in their last 20 following an ATS win. Take U.C.L.A.

I will take my chances here with UCLA and the points at Oregon. I think now is the time to sell high on the Ducks. Oregon has started out 2-0 SU and 2-0 ATS, but they caught a big break in their opener when Stanford’s starting QB was ruled out with Covid. The other win was against a rebuilding Washington State program.

Even without Mills, Stanford was able to put up over 400 yards of offense. Cardinal only scored 14 points, because of 4 missed field goals and a couple other empty trips into Oregon territory. Ducks then gave up another 400+ yards to Washington State.

I don’t know if UCLA’s defense is good enough for the Bruins to win this game, but I do think they got the offensive fire-power to keep it much closer than the number. UCLA nearly put up 500 yards in their opener against Colorado and then had over 400 against a good Cal defense.

Let’s not forget that Chip Kelly is now in year two with UCLA. It shouldn’t come as a huge surprise that the Bruins are moving the ball. Everyone just looks more comfortable in the offense. I know there’s a chance that starting quarterback Dorian Thompson-Robinson might not play, but I’m confident that they will still be able to move the ball. Kelly will do anything and everything to get a win against his old team. Give me UCLA +17.5!

Looking to cash in big on the college gridiron Saturday? Destroy the books with Lee’s SATURDAY NCAAF 4-PLAY POWER PACK!

Unload on your bookie with Jeff’s UCLA/OREGON *SIDE & TOTAL PACKAGE*!

Al McMordie CASHED his Pac-12 Game of the Month last Saturday on the Oregon Ducks over Washington State. And he has another huge Pac-12 Winner for you on Saturday. It’s Big Al’s Pac-12 Game of the Week, and it’s out of a sweet 90% ATS situation. Don’t miss out on the EASY $$$$, as Big Al’s on a red-hot 28-17 Football run. Get on board right now!

Jim Feist turns his attention to the PAC-12 on Saturday for his Conference Game of the Month. Jim has isolated this conference matchup because of big advantages that one team possesses in this matchup. Join a Vegas betting icon with over 48-years of experience at beating the books and WIN with JIM on Saturday with his PAC 12 Game of the Month.

My NCAAF 10 STAR WINNERS are a perfect 100% this season. These releases are as strong and as high-rated as my GAMES OF THE MONTH and GAME OF THE YEAR. I don’t put out a ton of these, but when I do, THEY ARE MONEY. Get on this highly-rated and proven winner and get paid.

Higgs is ready to unload on your sportsbook. Higgs up with his Top Rated 10* MONEY BOMB – Take your opinion, get a shovel, dig a hole in your yard, and bury it. Sean has you covered with this WINNER. Make the SMART MONEY MOVE today !

Do you want to GET PAID on Saturday? Then DO NOT MISS his NO BRAINER on UCLA v. Oregon!

Check out all available top rated college football picks released by our experts every day during the 2020-21 season.