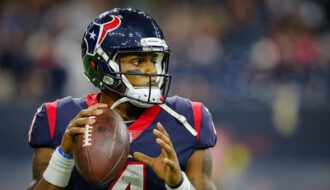 This AFC conference battle is scheduled to start at 1:00 PM ET and will be televised on CBS.

Below is current odds and all available free picks and best bets for today’s pro football game released by our expert handicappers.

The Key: I like the price we are getting on the Houston Texans this week. They have played one of the toughest schedules in the NFL with their 7 losses coming to the Chiefs, Ravens, Steelers, Vikings, Titans, Packers and Browns. Six of those 7 teams have winning records and the only one that doesn’t is the Vikings. Now they face a team they can handle here in the Patriots, who are 4-5 on the season only after winning their last 2 games against the Jets and Ravens. They needed a last second field goal to beat the Jets, then they took advantage of a banged up Ravens team last week and some good breaks due to the monsoon they were playing in. They had lost 4 straight prior to this winning streak including bad losses to the Broncos and 49ers. The Texans played well last week in a 7-10 loss at Cleveland in gale force winds. The game was forced to be played on the ground, which isn’t Houston’s style. Now they are back home here in a dome where they can take advantage of their speed. The Patriots have one of the slowest defenses in the NFL so this is a terrible matchup for them. The Patriots are 0-5-1 ATS in their last 6 games off an ATS win. The home team is 9-2-1 ATS in the last 12 matchups. Take Houston.

I just can’t pass up on the Patriots laying less than a field goal against a bad Texans team. New England clearly isn’t what it has been in recent years, but as long as they got Bill Belichick running the show, they are going to at worst be competitive.

It didn’t look good during their 4-game losing streak and it wasn’t pretty early against the Jets, but they found a way to beat New York and then just played one of their best games last week agaisnt the Ravens.

I really think the Patriots have got back some of their mojo they had early in the year. As for the Texans, this team is a complete mess. They can’t run the football and Deshaun Watson doesn’t have the weapons in the passing game. Now he won’t have his best offensive linemen in left tackle Laremy Tunsil.

On top of all that, this is a great matchup for the Patriots offense, who need to be able to run the ball to move the chains. They should definitely be able to do that against the Texans. Houston is allowing 167 rushing yards/game and giving up 5.2 yards/carry. With that said, I also think Cam can make some plays through the air against this secondary. Give me the Patriots -2!

9-5 L14 TOP RATED NFL premium picks! Whatever your betting plans are for Sunday, make sure they include Mike Lundin’s STRONGEST NFL BET for the whole month of November. This package features:

This is it! Sean’s RED HOT 24-8 NFL big ticket run continues with his ONE and ONLY 10* AFC Total of the Year on Sunday afternoon! Murph has OWNED the NFL this season and he’s ready to cash in AGAIN; don’t even consider missing out!

AAA Sports has delivered a ***MIND-BLOWING*** NFL campaign thus far. After Thursday’s win on Seattle, they’re on a 37-20-1 HOT STREAK!

In addition to their *10* GAME OF THE MONTH, there will be MANY other opportunities to win on Sunday! AAA has bundled THREE BIG WINNERS together in this package for you >> GET READY TO GO 3-0!!

If you are looking for the BEST BET in NFL for Sunday then this is the ONE! Sal’s 10* Platinum Club Play is as STRONG AS IT GETS and it goes on Patriots/Texans!

Come bet with a proven winner in pro football this weekend and get your hands on my Sunday All-Inclusive NFL 7-Pack for $49.99! This card features THREE 5 Unit BEST BETS in the Eagles/Browns, Falcons/Saints & Chiefs/Raiders games! You pay *ONLY $7.14/Play* for all 7 winners, and you are GUARANTEED-to-PROFIT or I’ll send you Monday’s NFL plays for FREE!

Chip Chirimbes the ‘Big Game Player’ and Las Vegas Hilton Handicapping Champion’s was a winner Thursday with Seattle (-3) 28-21 over Arizona and is 18-9 67% ATS in his last 28 NFL releases. Sunday, he has posted his ‘Highest-Rated’ 10*Megabucks winner between New England and Houston. Get Chip’s ‘Guaranteed’ Megabucks for just $49 or as part of his ‘Guaranteed’ to ‘Profit’ Triple-Play of NFL Best Bet winners.

Jim Feist was a perfect 5-0 last week with his NFL totals and 7-2 overall for a big winning weekend. Moreover, Jim is 8-0 with his last eight NFL total releases. Sunday, Jim has found a road team that he absolutely loves. Conditions have changed recently for this team and Jim sees them primed for a big win here on Sunday. Join Jim for his NFL Road Warrior Game of the Month and WIN with JIM in the NFL.

It seems every weekend my multi-game packages are getting you paid. This Sunday I have 7 BIG NFL WINNERS for you: 58-12 LAS VEGAS STRIP MOVE, SITUATION PLAY, TOTAL OF THE WEEK, 24-6 REVERSE ANGLE PLAY, CONSENSUS MOVE, 75% TOUCHDOWN PLAY, and my SUNDAY NIGHT LATE BAILOUT. This Sunday we all get rich. I am so sure of it that I am posting this NFL 7 GAME DISCOUNTED PKG. Get all 7 BIG NFL WINNERS at a DISCOUNT.

I release so few TOTALS that when I do, we all get paid. This Sunday, my analysts and I have an opportunity for you not just to win, but to WIN BIG! Be on my NFL TOTAL OF THE WEEK and WIN BIG!

Sports betting is all about “SITUATIONS.” This Sunday, we have isolated a SITUATION in pro football that will get us all paid. Something like this only comes around a few times a season. So, when it does, we MUST move on it. Be on my NFL SITUATION PLAY and be a winner.

Marc’s Top Rated 10* NFL Game Of The Month on Sunday’s card comes from his all-knowing database and it’s backed a pair of powerful winning angles that are 100% ATS perfect since 2000. Plus it features a pair of coaches that are also 100% ATS perfect on and against in their careers in today’s roles. Best of all it’s locked and loaded – get it now!

**#10 ranked Overall handicapper on this site!**

Doc’s Sports has you covered on Sunday with a slate of three NFL games starting at 1 p.m. eastern This package includes two sides plays and 1 total from the following games:

3-0 is just around the corner so sign-up now and let 49 years of handicapping experience work for you.

Be sure to take a look at all available NFL best bets released by expert cappers every day during the current season.