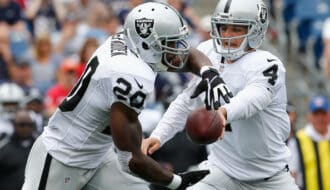 This AFC conference battle is scheduled to start at 8:20 PM ET and will be televised on Fox and NFL Network.

Below is current odds and all available free picks and best bets for Thursday night football released by our expert handicappers.

Thursday NFL Free play. My selection is on the ‘under’ between Los Angeles and Las Vegas at 8:20 pm et on Thursday.

While I’m not expecting a defensive slugfest in this one I do think we’ll see a lower-scoring affair than most are anticipating on Thursday night. Neither offense enters this game in peak form. The Chargers eked out a 20-17 win over the Falcons last Sunday and now look to post consecutive wins for the first time this season. They’ve scored a grand total of 37 points over their last three games. Meanwhile, the Raiders will certainly put an emphasis on cleaning things up defensively after firing defensive coordinator Paul Guenther following last Sunday’s blowout loss to the Colts. I’m equally concerned about their offense which simply hasn’t looked as efficient since RB Josh Jacobs got hurt (he’s back playing but not 100% healthy and suddenly in a running back by committee). Las Vegas will be without rookie burner WR Henry Ruggs on Thursday night after he was placed on the Covid list. While he hasn’t put up big numbers this season, he does have the ability to stretch out opposing defenses and his absence will certainly be felt as the Raiders aren’t exactly loaded with depth at the wide receiver position. The first meeting between these two teams this season reached 57 points. I don’t see this one approaching that number on Thursday night. Take the under (8*).

Sean is coming off a 7-2 NFL week and he’s putting his STELLAR 31-14 NFL big ticket run to the test with his 10* TNF Game of the Month for December featuring the Chargers vs. Raiders! Your best bet is a weekly or monthly subscription package, giving you access to ALL of Murph’s winners every day!

The set-up: These two teams combine to average less than 50 points per game this season. Los Angeles only averages 22.8 PPG this year and over it’s last three it’s scored 20, 0 and 17 points. LA also has plenty of injury issues on the offensive side of the ball.

The pick: The last ten games between these teams have produced an average score of just 42.6 points and I expect a similar final combined number here as well. Consider the “under” on Thursday night.

Frank Sawyer’s Hollywood Sports is on a 7 of 10 (70%) NFL TOTALS TEAR even after losing their 25* NFL under play for Monday Night Football! Frank is ON FIRE with a RED HOT 15 of 22 (68%) NFL run — and now he UNLEASHES his 25* NFL Thursday Night Football Total of the Year for tonight’s LA Chargers-Las Vegas O/U winner on Fox-TV at 8:20 PM ET! DO NOT MISS OUT!

If you think it’s time to WIN SOME MONEY on Thursday then it’s time to you get signed up for my 5* NO BRAINER on Chargers v. Raiders!

Jack went 4-1 last week in pro football and he has now delivered 11 WINNING CARDS L13 Days! He releases his 20* Chargers/Raiders AFC West No-Brainer for just $39.95 Thursday! He has the winning side in this game NAILED tonight behind a PROVEN 75-36 System in his analysis!

I am off to a 150-105 Football Start this season that has me sitting as the #1 Ranked Football Capper in 2020! I am releasing a 5 Unit BEST BET Thursday in the Chargers/Raiders AFC West rivalry on FOX at 8:20 EST tonight! These 5 Unit plays are my *BIGGEST* releases on a daily basis, and this one is GUARANTEED or I’ll send you Friday’s NCAAF plays for FREE!

The Chargers-Raiders go at it today in this NFL Thursday night matchup and Stephen Nover has you covered with another winner. Stephen is bidding to beat the NFL for the 24th time in 27 years. He’s been especially sharp on these Thursday games winning eight of his last nine NFL Thursday plays! So put Stephen’s 89 percent Thursday hot streak in your corner. Take advantage of his long-time expertise, elite analysis and powerful track record to turn a tidy Thursday profit!

If you’re looking to start NFL Week 15 with a BIG PAYDAY you are going to want to get your hands on this CHARGERS @ RAIDERS 8* THURSDAY NIGHT NFL BOOKIE BOMBER. Invest now and make your bookie pay the price.

Don’t miss out on a golden opportunity to build your bankroll with Steve’sChargers/Raiders NFL Sharp Money Top Play ($34.95)!

Everyone KNOWS how extremely HOT Ben Burns is on the hardwood. However, its no secret that his football has also been FANTASTIC. In fact, off MNF SIDE/TOTAL SWEEP, Ben is an AMAZING 15-3 his L18 football plays, pro and college. Looking just at the pros and we find Ben on an 11-2 NFL RUN. Burns says THERE’S ONLY ONE WAY TO GO Thursday. Get down NOW!

They’ve gone an AMAZING 12-2 on Thursday nights this season as they won BIG-TIME on the Rams last week! This week’s TNF selection is December’s BIGGEST!

Sean went an INCREDIBLE 7-2 in NFL action last week and is now riding a 207-160 NFL tear! His RED HOT 31-14 NFL big ticket run is on the line Thursday night as he targets his 10* TNF Game of the Month for December featuring the Chargers vs. Raiders; get the WINNER right here, right now!

Matt is ready for a strong finish in the NFL as we Week 15 looking to extend a SWEET 24-17-2 NFL Run! Also, he brings in a SOLID 18-10 Primetime Run into Thursday Night and his +$35,015 NFL run is extended as he keeps the Primetime SURGE rolling!

Get in on one of the BEST over/unders for sale on the site today for NFL. It’s my TOTAL DOMINATOR on Chargers v. Raiders and it will “Totally Dominate!”

Do you want to be on the RIGHT side or take a shot in the dark? You can be in the know for once and it’s easier than you think. SIGN UP NOW for our 10* INFO PLAY on Chargers v. Raiders!

When all of my sources, contacts, systems, and stats agree on a game it’s usually BIG! We have that situation tonight on Chargers v. Raiders and it’s a game you are not going to want to miss out on!

Ross Benjamin has a 5* ATS winning side on the Thursday NFL nationally televised game between the Chargers/Raiders (8:20 ET/Fox). Ross is a profitable 6-3 this season on Thursday night NFL picks.

Chip Chirimbes the ‘Big Game Player’ and Las Vegas Hilton Handicapping Champion is now a ‘Documented’ 23-12 66% in 2020 (because of those ‘rat-bastards’ on Monday) and 60-29 68% with his with his ‘Top-Rated’ Stand-Alone winner tonight between L.A. Chargers and Las Vegas Raiders. Win with Chip’s Stand-Alone Best Bet winner. Only $39.

Al McMordie’s a JAW-DROPPING 114-62 his last 176 NFL Prime Time TV releases after cashing the Buffalo Bills last Sunday night over the Steelers. And Big Al’s also 125-84 his last 209 Over/Unders. Tonight, Big Al puts both HOT STREAKS on the line, as he’s firing on his NFL Thursday Night Football Total of the Year. Don’t miss out….Get on board right now!

Marc’s hot hand in the NFL this season continues with a Top Rated Key Play Thursday night in the Chargers-Raiders showdown backed with three 100% ATS perfect winning situations in the game that are 20-0 ATS. Put it on the top of your playlist now and get your football week off on a winning note with Marc Thursday night!

The Thursday night Football GAME OF THE YEAR headlines in the NFL and is backed with a 21-0 Lead Power System and a detailed analysis. Put the POWER one of the nations TOP All sports analysts on Your Side tonight.

Since Thanksgiving, Power Sports has gone a STRONG 31-17 w/ ALL football bets! But that actually PALES in comparison to what happened yesterday!

Chargers @ Raiders is his #1 Thursday night side for 2020! What are you waiting for?

DO NOT MISS his NO DOUBT ROUT on Chargers v. Raiders if you want to GET PAID on Thursday!

The stars and the planets have ABSOLUTELY aligned for this big opportunity on Thursday night! I like to play underdogs, favorites, and I also LOVE pulling the trigger on Over/Under picks – here’s my VERY STRONGEST 10* NFL total for ALL of Week 15 – make sure to make the most of it!

Will Rogers is DOMINATING both the NFL and College gridirons this year! “The Coach” has completely DOMINATED Thursday night’s this season, going a STAGGERING 10-1-1 with ALL of his NFL picks over the last 11 Thursdays of action! Time to DOMINATE again in Week 15 – get on board, OR GET OUT OF THE WAY!