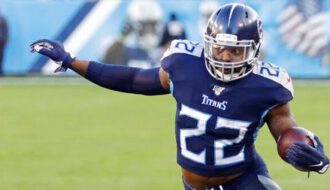 Thursday Night Football is scheduled to start at 8:20 PM ET and will be televised on FOX and NFL Network.

Thursday NFL Free play. My selection is on Tennessee over Indianapolis at 8:20 pm et on Thursday.

We’ve seen plenty of money flow in support of the Colts in advance of this Thursday night AFC South showdown. I believe it’s the wrong move. The Titans bandwagon was virtually cleared following their loss to the Bengals in Cincinnati two weeks ago. However, Tennessee did successfully bounce back with a victory at home against the Bears last Sunday and I look for it to keep rolling here. The Colts got smashed in the mouth, so to speak, in a home loss to the Ravens last week. While I do like a lot about this Colts squad, I’m still not convinced QB Philip Rivers is the guy to lead them back to the playoffs. Quite simply, I believe this is another primetime game where we’ll see Titans RB Derrick Henry put the team on his back and carry them to victory in Nashville. I can understand why we’re dealing with a pk’em pointspread range here, but that doesn’t mean I agree with it. Take Tennessee (8*).

Sean has won SEVEN STRAIGHT in NFL action after SWEEPING THE BOARD last week! He’s back with a 10* TOP RATED o/u winner featuring the Colts vs. Titans on TNF! Your best bet is a weekly or monthly subscription package, giving you access to ALL of Murph’s winners every day!

Frank Sawyer’s Hollywood Sports begins Thursday on a 21 of 33 (64%) Football Game of the Month/Year sides mark — and Frank furthers his RED HOT 12 of 18 (67%) NFL Game of the Year/Month run tonight with his 25* AFC South Game of the Month for the Indianapolis-Tennessee ATS winner on Fox-TV at 8:20 PM ET! DON’T MISS IT!

I had a huge season last year in pro football and I’m off to a 40-26 NFL Start this season that has my ranked as the #4 NFL Capper in 2020-21! I am releasing a 5 Unit BEST BET Thursday in the Colts/Titans AFC South showdown on FOX at 8:20 EST tonight! These 5 Unit plays are my *BIGGEST* releases on a daily basis, and this one is GUARANTEED or I’ll send you Friday’s NCAAF plays for FREE!

Unload on your bookie with Jeff’s COLTS/TITANS *SIDE & TOTAL PACKAGE*!

Jack releases his 20* Colts/Titans AFC South No-Brainer for just $39.95 Thursday! He has the winning side in this game NAILED tonight behind 86% & 80% Systems in his analysis!

Looking to cash in big on Thursday Night Football? Get your hands on Lee’s 50* COLTS/TITANS NFL *BEST BET* TOP PLAY!

Matt is ready for a strong finish in the NFL as we open Week 10 looking to extend a SWEET 12-6 NFL Run! Also, he brings in a SOLID 13-7 Primetime Run into Thursday Night and his +$34,015 NFL run is extended as he keeps the Primetime SURGE rolling!

Long-time NFL maven Stephen Nover has gotten involved in five Colts games this season – and won every one of them. Are the road Colts worth backing here, or are the Titans the right call? Don’t guess. Stephen knows these teams well and has pored over this matchup for hours to come to the right conclusion. Undefeated this week on his Monday, Tuesday and Wednesday football plays, Stephen wins again. So ride his expertise, in-depth, unique analysis and hot hand to cash this Thursday winner at a special reduced price!

PERFECT 7-0 NFL run continues! After SWEEPING THE BOARD in NFL action last week, Sean is back with Thursday night’s 10* TOP RATED o/u winner featuring the Colts vs. Titans on FOX! Over or under? Find out the winning answer – before it happens!

Don’t miss out on a golden opportunity to build your bankroll with Steve’sColts/Titans NFL Sharp Money Top Play ($34.95)!

AAA Sports had you winning before the end of the 3rd Quarter on Monday Night Football! (They had the Over!)

Now it’s a PERFECT 4-0 start to the week as they’ve also gone 3-0 in College Football the L2 nights!

Next – AAA has called in an “ASSASSIN” for Colts-Titans Thursday night! 32-16-1 NFL HOT STREAK!

If you are looking for the BEST BET in NFL for Thursday then this is the ONE! Sal’s 10* Platinum Club Play is as STRONG AS IT GETS and it goes on Colts/Titans!

Open Week 10 of the NFL with a MAJOR WAGER TOP PLAY winner on the Thursday Night Football matchup Indianapolis Colts @ Tennessee Titans. Do yourself and your bankroll a favor; invest in this premium pick release and build your bankroll with one of the best in the business.

When all of my sources, contacts, systems, and stats agree on a game it’s usually BIG! We have that situation tonight on Colts v. Titans and it’s a game you are not going to want to miss out on!

Do you want to be on the RIGHT side or take a shot in the dark? You can be in the know for once and it’s easier than you think. SIGN UP NOW for our 10* INFO PLAY on Colts v. Titans!

I get the BEST INFO on what’s going on in the NFL and that’s how I product STRAIGHT CASH for my clients!

If you want to win in pro football the formula is simple: BUY THIS PACKAGE, follow along, and PROFIT!

Ross Benjamin has gone 29-18 (62%) L47 with his NFL pay picks this season. He has a 5* winning total on the Thursday night nationally televised game between Indianapolis/Tennessee (8:20 ET/Fox). Ross is also an outstanding 16-8 (67%) L24 with his NFL totals. Get your NFL Week 10 slate off to a profitable start from purchasing this pick from a proven winning professional.

This is the Top selection from one of the nation’s top cappers for the last 28 years. No further hype needed. When you win make sure to purchase a weekly, monthly, or yearly pass to ensure your success through the Super Bowl.

The Indianapolis Colts visit the Tennessee Titans in Thursday night NFL action. Which team has the edge and more importantly which side cashes for their backers.? Your 100% guaranteed answer is locked and loaded and ready to make the books pay for taking our action. Tests 12-6 67% NFL side run! Kick off after 8:20

Jim Feist’s Inner Circle Plays have been a staple among his betting clients for over 30 years. Jim only assigns this label to some of his top rated games and today’s 15-star rated play gets this coveted label. Thursday Night it’s the Indianapolis Colts and the Tennessee Titans facing off under the lights. Join a Vegas betting icon with nearly half a century of winning and beating the books and WIN with JIM on Thursday with his Inner Circle Insider.

Marc’s super hot run in the NFL this season rolls on Thursday night with a Top Key Play in a jaw-dropping 19-0 ATS winning situation. Hurry, get it now – don’t wait!

DO NOT MISS his NO BRAINER on Colts v. Titans if you want to GET PAID on Thursday!

The AFC South GAME OF THE MONTH Headlines on Thursday and its backed with a HUGE Database Divisional System and a plethora of POWERFUL Angles. Dont wait get on this one NOW.

This play on Colts-Titans is among the STRONGEST Thursday night selections we’ve seen from Power Sports so far this NFL season!

Power is coming off a LAUGHER on Monday night as the Over was a winner IN THE 3RD QUARTER! So what are you waiting for? Get in the game!

Will Rogers won last Thursday, he won on Sunday and he won on Monday! He’s now on an 8-1 NFL run and looking back finds him on a SICK 24-12 NFL streak! He’s also a SHARP 14-4-1 (+$9,000) with ALL picks in November and after a rare loss Wednesday, a PERFECT SWEEP is fully expected on Thursday – your move!

Check out all available top rated picks and NFL best bets released by our handicapping experts every week during the 2020-21 season.