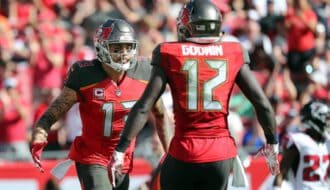 This NFC conference showdown is scheduled to start at 8:15 PM ET and will be televised on ESPN.

The set-up: This total hasn’t deviated much since it opened. The Bucs and Rams each possess above average defensive units and I believe that they’ll be the main story line in tomorrow’s summaries. The Rams came out of their bye-week last week to beat the Seahawks 23-16. Jared Goff had over 300 yards passing for a second straight game, but it was LA’s smothering defensive play which “stole the show,” posting six sacks and two interceptions. Bucs’ QB Tom Brady has already struggled this year against strong pass rushing defenses so the veteran is likely to have his hands full tonight.

The picks: The Bucs haven’t had their bye-week yet and head coach Bruce Arians has already admitted that his team is “tired.” Tampa’s defense catches a break though facing a Rams’ offense which would not be classified as “explosive” (note as well that Tampa has seen the total go “under” the number in eight of its last 11 after scoring 45 points or more in a 20 points or greater victory in its last outing.) Consider the under in MNF.

Unload on your bookie with Jeff’s RAMS/BUCS *SIDE & TOTAL PACKAGE*!

RAMS OR BUCS? => With Friday, Saturday and Sunday’s winners, Ben Burns is a PERFECT 4-0 his L4 top-rated plays. Going back further finds that this “Big Game Guru” is a SICK 42-25 (+$12K) with his top-rated releases, all sports, since the beginning of October. Going back still further finds that his top plays are on a long-term $48K PROFIT RAMPAGE!

Mike Lundin is on a SIZZLING HOT 14-5 RUN L19 PREMIUM PICKS across all sports. He’s looking to put another beating on the bookie with this RAMS @ BUCS MONDAY NIGHT FOOTBALL 10* TOP PLAY! Invest and unload on your bookie with 100% CONFIDENCE!

18-9 last 27 NFL ATS plays. This NFL Monday Night Football ATS CASH is a great way to cash in while you watch Monday night football this week!

Don’t miss out on a golden opportunity to build your bankroll with Steve’sRams/Bucs NFL Sharp Money Top Play ($34.95)!

Sean nailed his NFC Game of the Month with the Giants over the Bucs on November 2nd and he’s ready to extend his RED HOT 25-9 NFL big ticket run with his 10* NFC Total of the Month for November on Monday night! The Rams battle the Bucs on ESPN – find out whether this NFC showdown is headed OVER or UNDER the total – before it happens!

After a ***MIND-BLOWING*** start to the NFL season, AAA Sports has now ripped off a 21-8 HOT STREAK in College! This HISTORY-MAKING football season just keeps going … and going!

Though it was a tough Sunday, Monday night is when we usually find AAA AT THEIR BEST! They’re on a 9-1 MNF RUN after they won with the Vikings last week! Get on board!

Jack is the KING of Monday Night Football with a 51-30 MNF Run over his last 81 releases! He proves it once again this week with his ONE & ONLY 25* MNF GAME OF THE YEAR for just $49.95! He has the winning side in Rams/Bucs NAILED tonight folks, so DO NOT be shy with your wagers!

GUARANTEED or Tuesday college football is ON JACK!

I am releasing a 5 Unit BEST BET Monday in the Rams/Bucs NFC showdown on ESPN at 8:15 EST tonight! These 5 Unit plays are my *BIGGEST* releases on a daily basis, and this one is GUARANTEED or I’ll send you Tuesday’s NCAAF plays for FREE!

When all of my sources, contacts, systems, and stats agree on a game it’s usually BIG! We have that situation tonight on Rams v. Bucs and it’s a game you are not going to want to miss out on!

Let’s start the week off right, with a big MONDAY NIGHT FOOTBALL WIN! I have the winner of the RAMS/BUCS matchup to start your week.

The LA Rams visit the Tampa Bay Buccaneers in Monday night Football action. Join me for tonights side winner and make the books pay for taking our action. Kick off after 8:20 pm et

The LA Rams visit the Tampa Bay Buccaneers in Monday night Football action. Join me for tonights side winner and make the books pay for taking our action. Kick off after 8:20 pm et

Experience what Dana Lane can do for you tonight by jumping on my play of the week. Dana has crushed over 55% of his NFL plays for the last six weeks. No further hype needed.

When you win make sure to purchase a weekly, monthly, or yearly pass to ensure your success right through the Super Bowl. Also, don’t forget, College Basketball starts this week so make sure to purchase a season pass. If you’ve been with me in the future you know my strong season is right around the corner Follow Dana Lane all season for a massive discount off the individual game price.

Al McMordie’s 5-3 in the NFL this week (including an easy NFL Game of the Month Winner on Dallas over Minnesota). And Big Al’s also 18-8 his last 26 NFL, and 110-61 his last 171 NFL Prime Time TV Releases. Here, pick up Big Al’s Monday Night Football Winner, backed by a terrific 91% ATS situation, as well as an 82% ATS system. Don’t miss out … Hop on board right now!

The Monday night PLAY OF THE MONTH headlines tonight and is backed with a HUGE League Wide System and several powerful angles one is PERFECT. Get on this BIG BANGER now and start the week BIG.

Higgs ready for Monday Night Football. Rams head to Tampa. Money – Monday is here. College Hoops tip Wednesday. Build Your Bankroll $ Sean has your WINNER up now. Thanksgiving NFL Picks up now $ Make the SMART MONEY MOVE and get on board today!

We’ve isolated a Best Bet in the Monday Night Football game between the Rams & Bucs. We present you with the spot on reasoning as well as a clear winner in this contest. Join us for this MNF Best Bet.

Power Sports has already cashed his #1 MNF Total for November. It was two weeks ago when he had the Over in Patriots/Jets. The Over hit IN THE 3RD QUARTER!

This is Power’s #1 NFC OU PLAY the month!

Jim Feist was a perfect 5-0 last week with his NFL totals and 7-2 overall for a big winning weekend. Moreover, Jim is 8-0 with his last eight NFL total releases. It’s Monday Night Football and Jim Feist IS the King of Monday Nights. Tonight we have the LA Rams vs the Tampa Bay Bucs. Jim has the over/under call in this game. Join a Vegas betting veteran with over 48-years of winning experience and WIN with JIM on Monday Night.

Marc’s amazing database share another NFL Crush Play on Monday night’s primetime showdown between the Bucs and the Rams. Best of all it’s backed with a powerful winning angle in the game that is 100% ATS in Monday Night games since 1980. Don’t let it win again without you being there – get it now!

This is a very interesting matchup between two teams that are expecting to be fighting for the NFC Crown! Over?! Under?!

Join me on Monday night as I’m ready to BURN VEGAS TO THE GROUND this weekend – you know EXACTLY what to do!

Check out at all available top rated NFL picks released by expert handicappers every week throughout 2020-21 season.