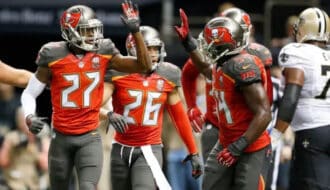 Sunday Night Football is scheduled to start at 8:20 PM ET and will be televised on NBC.

The set-up: Drew Brees and the Saints have already beaten the Bucs and I think they’ll at the very least, take this Sunday night matchup down to the wire as well. Brees and the Saints coe in off a tough 26-23 OT win over the Bears last weekend. Michael Thomas is expected back in the line-up for Brees, which is big for the Saints’ offensive attack, as it then opens up the run game and pass action. The Saints’ defense is underrated, allowing only 328.4 YPG.

The pick: Tampa is lucky to be leading the division after last week’s narrow 25-24 win over the Giants. The Bucs are filled with talent and potential, but the group is still in unchartered territory together and I think that matters at this time of year. Both teams are among the offensive and defensive leaders, but note that the Bucs are still just 2-7-2 ATS in their last 11 at home. In this important divisional battle, consider grabbing the points.

This is a 1* FREE PLAY on the SAINTS.

Don’t miss out on your chance to cash in a profit on the pro gridiron this Sunday. Destroy the books with Lee’s 50* SAINTS/BUCS NFC SOUTH PLAY OF THE YEAR!

Unload on your bookie with Jeff’s SAINTS/BUCS *SIDE & TOTAL PACKAGE*!

AAA Sports has completely OBLITERATED the NFL this season! They are on a ***MIND-BLOWING 30-12 RUN!***

Last week they won with the OVER in BOTH the Saints & Bucs games! Those two NFC South sides meet Sunday night on NBC. AAA has the ANSWER on how to play this HEAVYWEIGHT matchup!

Jack is ready to send you to bed a winner with his 15* Saints/Bucs NBC Sunday Night BAILOUT for just $34.95! He has the winning side in this game NAILED tonight behind a PERFECT 16-0 System in his analysis that will have you sprinting to the pay window to place your wagers!

Matt is ready for a strong finish in the NFL as we close Sunday looking to extend a SWEET 10-3 NFL Run! Also, he brings in a SOLID 12-6 Primetime Run into Sunday Night and his +$35,015 NFL run is extended as he keeps the Primetime SURGE rolling!

Long-time NFL guru Stephen Nover had a winner last Sunday night with the Eagles and he has another huge winner in the Saints-Buccaneers matchup. Stephen knows these NFC South Division teams well and has the right contacts having covered the Saints during his days as a sportswriter in New Orleans. So take advantage of his expertise, top-notch analysis and proven track record – 23 of 26 winning NFL seasons – to cap your Sunday with this monster winner knowing the odds are stacked on your side!

Let’s CASH IN on Saints v. Bucs and MAKE SOME MONEY Sunday. It’s easy, BUY THIS PACKAGE, follow along, and COLLECT your profits!

We MUST SHOW A PROFIT or else you will get Monday’s PREMIUM NFL PICKS on us!

Ben Burns enters Week 9 on a WHITE HOT 13-4 NFL RUN. Last week, Ben successfully played against BOTH the Saints AND the Bucs. This Sunday, these teams, led by their legendary QBs, meet in primetime. Burns won with the Saints when these teams met in Wk 1. He KNOWS there’s ONLY ONE WAY TO GO in the rematch. Brady or Brees? Don’t wait and DON’T GUESS!

When all of my sources, contacts, systems, and stats agree on a game it’s usually BIG! We have that situation tonight on Saints v. Bucs and it’s a game you are not going to want to miss out on!

On Sunday night FOOTBALL on NBC the SNF Total of the Month Headlines. This Massive Totals play is backed with a Pair of POWERFUL Totals System. Those with us last week SWEPT Prime time Plays going 3-0. End the night BIG.

Dana Lane continues to be one of the leading National Football League handicappers because he is simply consistent. When you need a winner the most you know who to turn to. Put 28 years of Las Vegas betting experience to work for you as we crush another day of NFL football. When you win make sure to purchase a weekly, monthly, or yearly pass to ensure your success through the Super Bowl.

59% documented winners over the last month+.

<b>Al McMordie’s a JAW-DROPPING 104-59 his last 163 NFL Prime Time TV</b> releases. And the winning continues on this Sunday Night. It’s the NFC South division battle between the Saints and Buccaneers, and <b>Big Al’s NFL Elite Info Winner</b> is out of a 100% Perfect, 11-0 ATS situation. Get the <b>12th STRAIGHT WINNER</b> right here, and get the EASY $$$$ on Sunday night!

Marc’s amazing database share another NFL Kill Play on Sunday night’s primetime showdown between the Bucs and the Saints. Best of all it’s backed with a pair of never lost winning situations inside the game. Don’t let it win again without you being there – get it now!

Ross Benjamin has a 5* ATS winning side on the Sunday night nationally televised game between New Orleans/Tampa Bay (8:20 ET/NBC). Ross is an outstanding 26-15 (63%) L41 and 10-5 (67%) L15 this season with his NFL pay picks. Close out your Sunday NFL wagering out on a profitable note by purchasing this solid gold winning pick.

The New Orleans Saints visit the Tampa Bay Buccaneers in Sunday night NFL action. Join me as I explain which side has the edge and more importantly which side will help us expand our bankrolls. Kick off after 8:20 pm et

ARE YOU READY TO GET PAID? This Sunday I have the strongest and highest-rated NFL TOTAL of the season thus far in my NFC SOUTH TOTAL OF THE MONTH. Follow me here Sunday, or you will hate yourself Monday.

Higgs ready to close out NFL Sunday. It is the Sunday BAIL OUT. Saints and Tampa – Brees and Brady. No AARP meeting . This is Sunday Night Football. Sean has your WINNER up now!

Last Sunday saw Power Sports NAIL his *10* NFL GAME OF THE YEAR! It was on the Dolphins, who pulled off an UPSET WIN – by DOUBLE DIGITS!

The Sunday night matchup between New Orleans & Tampa Bay is RIPE for the taking! What are you waiting for? Get in the game.

Last Sunday saw Power Sports win his *10* NFL GAME OF THE YEAR! Clients were treated to a HUGE UPSET by Miami!

Off that DOUBLE DIGIT winner, Power IMMEDIATELY knew who his #1 side for Week 9 would be! The bet has been in for days and there’s not much time left for you to get in the game! What are you waiting for?

My BIGGEST 10* NFL picks have been leading the charge ALL season and they simply DO NOT get much bigger than this!

Be sure to check out all available best NFL bets released by our experts every week during the 2020-21 season.