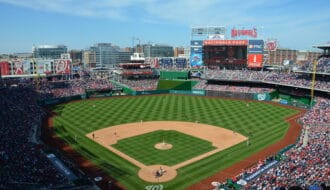 A new week, a new selection of MLB betting opportunities to build our bankrolls. A short card for today with only 9 games on the board, but still some value to be found.

View 5 featured MLB baseball picks and predictions with analysis for Monday, August 24, 2020 released by our betting expert below.

Don’t forget to look at the best MLB cappers for the week, month and entire season.

We’re getting the defending World Series champs at a great price Monday as small favorites over the Miami Marlins.

Pablo Lopez has never beaten the Nationals, going 0-2 with an 8.86 ERA and 1.88 WHIP in 5 lifetime starts against them.

The Texas Rangers will be highly motivated for a victory tonight over the Oakland A’s. They have lost eight straight coming in and need to get it turned around quickly. Ace Lance Lynn is just the guy to stop the bleeding.

I’ll back the ‘under’ at Miller Park on Monday night as Reds ace Trevor Bauer looks to continue his red hot start to the season. Bauer is undefeated with a 0.68 ERA and 0.57 WHIP not to mention a 41:7 strikeout-to-walk ratio so far. H

ere he’ll face a bottom-tier Brewers offense that ranks T26th in runs per game and 27th in team batting average.

Brewers veteran starter Brett Anderson went 13-9 with a 3.89 ERA last season and he’s actually pitched even better in the early going this year. Anderson’s strikeouts per nine innings are up while his walks are down compared to 2019.

We’re obviously still dealing with a small sample size when it comes to both of these starters, but I look for the trends to continue in their favor on Monday.

The Houston Astros are 10-4 at home this season and return home after getting swept at San Diego over the weekend.

They get back on track here against the Los Angeles Angels, who are 9-20 on the season and just 4-11 in road games.

Framber Valdez is 2-2 with a 1.80 ERA in his four starts this season for the Astros.

Patrick Sandoval is 0-3 with a 5.40 ERA in his four starts for the Angels.

Give me the Astros.

View all available free MLB picks with analysis for Monday.