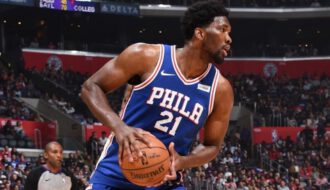 NBA Playoffs Game 4 of the Eastern Conference best-of-seven first round match-up between (6) Philadelphia 76ers vs. (3) Boston Celtics at the ESPN Wide World of Sports Complex in Lake Buena Vista, FL.

76ers/Celtics- UNDER! It really doesn’t look the 76ers can play with Boston in this series. Joel Embiid is a one man gang but that hasn’t been enough as they have dropped the first two scoring 101 points in both losses. The Sixers bench has not picked up the slack left since Ben Simmons went down but I expect more from them in Game 4. PLAY UNDER!

His #1 NBA side for the week goes *EARLY* on Sunday and promises to be “one for the ages!”

6-2 last 8 NBA plays. Red HOT on the hardcourt. This NBA Super System SMASHER is backed by a MASSIVE 22-1 system. Don’t miss this NBA winner. CASH in!

Join Cappers Club with his spread on Celtics v. 76ers!
The Cappers Club is here to make you a smarter sports bettor! As always, “The Club’s” plays come GUARANTEED! You will profit or the next day is FREE!

Join Marc David with his Spread on Celtics v. 76ers!

Since NBA play resumed, David has treated his customers with a FABULOUS 22-11 RUN that has brought nothing but CASH TO THE TABLE! Grab yourself a seat to START YOUR OWN PILE TODAY BECAUSE IT’S NEVER A BAD TIME TO EARN! There is a chair waiting and EVERYONE GETS THE CHANCE TO MAKE MONEY! START TODAY AND WATCH YOUR PILE GROW!

Join Ryan Worden with his Total on Celtics v. 76ers!

Higgs ready to close out the week with some NBA. Sean locked in with another WINNER here on Sunday. Time to Build YOUR Bankroll.