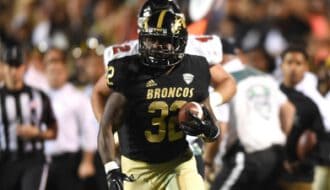 This college football contest is scheduled to start at 8:00 PM ET and will be televised on ESPN.

All plays are made using sophisticated machine learning models.

Both these teams looked great against weaker competition last week. However, this will be a big step up in class for both, as these figure to be two of the stronger teams in the conference. That makes this a big game, in terms of positioning, in the MAC’s West division. While the Broncos have home field advantage, I expect the Rockets’ running game to ultimately make the difference. Toledo is 3-0 SU/ATS the last three in the series. Last season, the Rockets racked up 275 yards on the ground, en route to a 31-24 win. The offensive line and running game remain a strength for Toledo and the Broncos remain vulnerable on the ground. Last time here in Kalamazoo, the (+4.5) Rockets won by a score of 51-24. Another upset won’t surprise. Consider grabbing the points.

Wednesday CFB Free Play. My selection is on the ‘over’ between Toledo and Western Michigan at 8 pm et on Wednesday.

This game has true shootout potential as Toledo heads across state lines to challenge Western Michigan on Wednesday night. The Rockets got off to a solid start with a blowout win over Bowling Green last week. Even if that was an expected result, it was impressive nonetheless as Toledo racked up over 500 total yards en route to a 38-point outburst. While the Rockets defense held up well in that game, it is worth noting that it didn’t record a single sack in the contest, and will obviously be taking a big step up in class against Western Michigan. The Broncos rolled to a 58-13 victory over Akron last week. Much like Toledo, WMU will obviously be stepping up in class here but I believe its offense will be up for the challenge. On the flip side, the Broncos don’t boast an elite defense, even by MAC standards, noting that they did allow Akron to control the football for nearly 30 minutes in last week’s contest. Expect an entertaining, back-and-forth affair on Wednesday night. Take the over (8*).

Sean stayed PERFECT last night, cashing his 10* MAC Total of the Month (plus his free winner)! He’s back with TWO 10* TOP RATED CFB winners on Wednesday night, keyed by his MAC Game of the Week! Your best bet is a weekly or monthly subscription package, giving you access to ALL of Murph’s winners every day!

We are deep into the College Football season and the MAC is back underway. Matt opens Week 11 with a Top Play Enforcer on Wednesday which he loves! Build your bankroll with a play that COVERS WITH EASE!

Oddsmakers don’t care too much for the Mid-American Conference. But Midwest native Stephen Nover does. Stephen follows this conference closely and his hard work has brought about big profits – 10-3 on his last 13 MAC plays for 77 percent including an easy winner with Buffalo on Tuesday. Grab a big edge on the house by taking advantage of Stephen’s MAC expertise, elite information and powerful track record to profit again today.

Unload on your bookie with Jeff’s TOLEDO/W MICH *SIDE & TOTAL PACKAGE*!

Last Wednesday saw AAA come through with one of their RED DRAGON plays. It was on MIAMI, showing yet again why these are some of their most sought after releases!

I delivered a 2-0 Tuesday MAC SWEEP with Buffalo -9.5 & Kent State OVER 55 winning easily! You won’t find another handicapper on this site that can claim to have FOUR Top-3 NCAAF Finishes since 2008! I’ve backed it up with a 56-38 NCAAF Start this season while currently being ranked as the #2 NCAAF Capper in 2020-21! I am releasing a 5 Unit BEST BET Wednesday in the Toledo/Western Michigan MAC clash on ESPN at 8:00 EST tonight! These 5 Unit plays are my *BIGGEST* releases on a daily basis, and this one is GUARANTEED or I’ll send you Thursday’s football plays for FREE!

**2X Top 10 NCAAF Handicapper!** Dave was the #6 NCAAF Capper in 2011 and the #7 NCAAF Capper in 2008 as well! He is on a 56-27 NCAAF Run overall while also being ranked as the #1 NCAAF Capper in 2020! He is also the #3 Ranked Overall Capper in 2020 and riding a HOT 295-203 All Sports Run since December 28th! Hop on board for Dave’s 7* Toledo/Western Michigan MAC *HEAVY HITTER* for only $39.95 Wednesday! He has pinpointed the winning side in this matchup tonight ladies and gents! Dave’s selection is guaranteed or you get Thursday’s football picks for FREE!

Get ready to WATCH & WIN on the NCAA gridiron with Jack’s 20* Toledo/WMU ESPN No-Brainer for just $39.95 Wednesday! He has the winning side in this game NAILED tonight behind TWO 6-0 Systems in his analysis that simply cannot miss!

GUARANTEED or Thursday football is ON JACK!

Today I have SOMETHING SPECIAL for you!

When all of my sources, contacts, systems, and stats agree on a game it’s usually BIG! We have that situation tonight on Toledo v. Western Michigan and it’s a game you are not going to want to miss out on!

Cash in big with my NO LIMIT PLAY in NCAA-F and see how easy sports betting can be.

There are THREE MAC college Football games on Wednesdays nights rotational schedule and one game stands out as having a weak total attached to it as Western Michigan hosts Toledo. Join me as I explain which side of the number the combined score will fall on and get the info the books do not want you to have. Tests 58% L/31 CFB totals run! Kick off after 8 pm et

Ross Benjamin starts Week 11 of the college football season with a 5* ATS winning side in the nationally televised game between Toledo/Western Michigan (8:00 ET/ESPN). Purchase this pick and wager with supreme confidence like you never have before.

Al McMordie’s a RED-HOT 14-7 his last 21 Football releases, and he’s back in action on this Wednesday. Here, pick up Big Al’s #1 Mid-American Conference Game of the Week, out of a 100% Perfect, 8-0 ATS angle. Get the 9th STRAIGHT WINNER right here, and BURY your Book on this Wednesday!

Be sure to check out all available top rated college football picks released by our experts every week during the 2020-21 season.