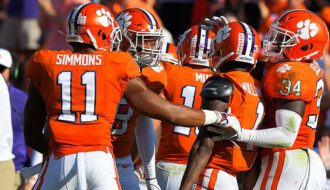 Saturday’s game is scheduled to begin at 7:30 PM ET and be televised on ABC.

Below you will find current odds and all available free and premium picks for this Week 2 college football matchup released by our expert handicappers.

I don’t normally play huge favorites like this on the road, but my formulas do like the scenario with a 23-8 ATS Record over the last 11 years.

Wake Forest will have no fans for this game, and for the entire month of September. They have a ton of players to replace at the skill positions on offense with just 2 returning starters, and I expect them to struggle particularly early in the season. Wake lost to Clemson 115-6 the last two seasons, and I expect to see a motivated Clemson team here with Trevor Lawrence and Travis Etienne each playing for stats and the Heisman Trophy. This has blow out written all over it. Stand alone game ABC, primetime with players feeling very thankful to be playing.

With everything going on right now it’s honestly extremely hard to lay any type of points in college. We all know Clemson is very good and I won’t be taking anything away from there here as far as that goes. My issue is how much are they interested knowing zero fans and a cupcake game here. I also think we will see coaches rest their starters a lot more when a game gets out of hand. So with that I think Wake and the points here are a great value. Wake will have a solid defense with 9 starters back which is what you want when backing a big underdog like that. I could easily see Wake being down 37-10 and start to rest guys leaving Wake an easy score. I look for Wake to lose by 20 some points here and cover this one easily.

Rocky Atkinson has a Saturday OVERALL winner for you. One of the BEST HANDICAPPERS in the world is on an impressive 105-67 61% OVERALL run over his last 175 picks! Join the same handicapper that has made $1,000/game bettors $34,730 since January 20, 2020 with his Spread on Clemson v. Wake Forest!

Between Saturday in college football and Sunday and Monday in pro football, I have 5 HUGE WINNERS for you: NCAAF 82.2% NO LIMIT, NFL AFC NORTH GAME OF THE MONTH, NFC EAST GAME OF THE WEEK, ‘DOG OUTRIGHT WINNER, and my STEELERS/GIANTS MNF WINNER. These are selling combined for over $195. But I want the masses to start the season off with HUGE PAYDAY and I am so sure I will get you paid, that you can have them all for just $69. This is my gift to you.

We are going to kick off the college football campaign with 1 HUGE WINNER. That’s right, I have my NCAAF 82.2% NO LIMIT PLAY. They got their name because they win so often, there is NO LIMIT to what you can make on them. Be on the first No LIMIT of the season and be a HUGE WINNER.

Power Sports has gone 4-1 each of the L2 Saturdays! Last week, he won his ONLY NCAAF bet – by DOUBLE DIGITS – on the Under in SMU-Texas State!

It won’t be the most marquee Saturday night game of the season, but Clemson-Wake Forest is “DEFINITELY worth playing” according to Power! Play accordingly!

Long term you’d be hard-pressed to find someone who can keep up with my winning percentage in college football.

Are you READY TO WIN? SIGN UP NOW and profit on the Clemson v. Wake Forest matchup!

Get this winner for ONLY $19.99! Remember, you are GUARANTEED TO PROFIT or my next card is yours FREE!

**#3 ranked Overall handicapper on this site!**

I am 2-0 in College Football and 1-0 in the NFL, making me 3-0 (100%) with ALL “Football” picks this season! Time to keep that DEADLY ACCRUATE PRECISION ROLLING on Saturday!

Hop on board, it’s time to PAD YOUR BANKROLL with this top rated 10* selection > > > BE THERE!

Check out all expert college football picks for Saturday, Week 2 and every week during the entire 2020-21 season.