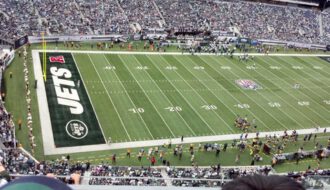 Monday Night Football is scheduled to start at 8:15 PM ET and will be televised on ESPN.

Below is current odds and all available free picks and top rated best bets for tonight’s game released by our expert handicappers.

Monday NFL Free play. My selection is on New England minus the points over New York at 8:15 pm et on Monday.

They really can’t set this line high enough in favor of the Patriots. However, due to New England’s recent struggles, the Pats aren’t going to draw a tidal wave of support in the betting marketplace. That suits us just fine as we deal with a very reasonable pointspread. Pats QB Cam Newton hasn’t looked like the same quarterback since returning to the field following his COVID diagnosis. With that being said, this is an absolute smash spot for Newton against a struggling, undermanned Jets defense that has traded virtually all of its worthwhile pieces away – clearly in tank for Trevor mode here at the midway point of the season. While the Pats are missing plenty of key pieces of their own – particularly on offense – I expect Cam to be set up with plenty of short fields in this one, and to ultimately capitalize. Jets QB Sam Darnold has essentially been left on an island trying to will the football down the field. While he does draw a better matchup than he has seen in recent weeks, there’s little reason for optimism in terms of keeping his team competitive in this game. Take New England (8*).

Sean delivered a PERFECT 3-0 SWEEP in NFL action yesterday and is now a PERFECT 6-0 this week (including free plays)! He’s back to extend his RED HOT 21-7 NFL big ticket run with his 10* AFC East Total of the Year on Monday Night Football; don’t miss out! Your best bet is a weekly or monthly subscription package, giving you access to ALL of Murph’s winners every day!

The set-up: Both teams have had to deal with plenty of adversity. Of course, hindsight is “20-20,” but it’s interesting to note that Cam Newton and the Patriots were equal favorites with the Bills to win the AFC East before the season started. Newton has one TD and seven interceptions. New England is dealing with turnover and many players opted out before the season even started. New York was hit hard by the injury bug right off the start and it’s never been able to recover properly. Sam Darnold and the Jets have struggled with consistency on both sides of the ball this year, but they’ll be out to break their winless streak, while also avenging eight straigth setbacks in this series.

The picks: A couple of strong O/U trends also point to a higher-scoring affair, as note that New England has seen the total soar over in four of its last five on the road, while New York has seen the total go “over” in ten of its last 14 after five or more SU losses. Expect these two desperate clubs to fight hard for this victory and consider the “over” as well.

This is a 1* FREE PLAY on the OVER Pats/Jets.

Frank Sawyer was a disappointing 2-3 in All-Sports on Sunday (including a heartbreaking final play loss with the Chargers before getting blasted by the train wreck which was Tampa Bay last night). Frank remains on a SIZZLING 17 of 29 (59%) NFL run even after that wreckage — and he BOUNCES BACK for Monday Night Football where he SWEPT THE SIDE AND TOTAL last week with NY Giants and the Over! Now Frank has tonight’s New England-NY Jets ATS winner on ESPN at 8:15 PM ET! CA$H-IN Frank’ Monday Discounted Deal — IT’S A STEAL!

Frank Sawyer CA$HED with the New Orleans-Tampa Bay Under last night to further his 10 of 14 (71%) NFL TOTALS TEAR! Now Frank has tonight’s Patriots-Jets’ O/U winner on ESPN at 8:15 PM ET for Monday Night Football! WATCH and WIN — and BANK on Frank!

Matt is ready for a strong finish in the NFL as we close Week Nine looking to extend a SWEET 11-6 NFL Run! Also, he brings in a SOLID 12-7 Primetime Run into Monday Night and his +$33,015 NFL run is extended as he keeps the Primetime SURGE rolling!

Don’t miss out on a golden opportunity to build your bankroll with Steve’sPatriots/Jets NFL Sharp Money Top Play ($34.95)!

The Patriots and Jets meet tonight and you want Stephen Nover on your side. Stephen is undefeated on his Jets selections this season and has the right play in this game. There is more than meets the eye in this nationally televised matchup. Stephen has put in a lot of work to determine the right side and now he’s come up with the right team to back. So take advantage of his expertise, elite in-depth analysis and unbeaten Jets mark to turn a tidy Monday profit!

Unload on your bookie with Jeff’s PATRIOTS/JETS *SIDE & TOTAL PACKAGE!

Don’t miss out on your chance to cash in a profit on Monday Night Football with Lee’s 40* PATRIOTS/JETS MNF VEGAS INSIDER!

Do yourself and your bankroll a favor; invest in this PATRIOTS @ JETS MONDAY NIGHT FOOTBALL BOOKIE BU$TER release and build your bankroll with one of the best in the business.

Ben Burns took it on the chin over the past couple of days. A rare tough weekend. He bounces back BIG and starts his next winning streak right here. Don’t miss!

Going for EIGHT STRAIGHT NFL big ticket winners! Sean delivered a 3-0 SWEEP in NFL action yesterday and is now a PERFECT 6-0 this week (including free plays)! He’s putting his RED HOT 21-7 NFL big ticket run to the test with his 10* AFC East Total of the Year featuring the Patriots vs. Jets on Monday Night Football; don’t even consider missing out!

Get in on one of the BEST over/unders for sale on the site today for NFL. It’s my TOTAL DOMINATOR on Patriots v. Jets and it will “Totally Dominate!”

I have a simple formula to help you BEAT THE NFL: sign up for this package, follow along, and PROFIT!

Jack is the KING of Monday Night Football with a 51-28 MNF Run over his last 79 releases! Get ready to WATCH & WIN with his 20* Patriots/Jets ESPN Monday No-Brainer for just $39.95! He has the winning side in this game NAILED tonight behind a SWEET 30-7 System and another 6-0 Trend in his analysis!

I have gone 16-5 L21 NFL Picks to improve to a 40-25 NFL Start this season to pick up right where I left off last season! I am releasing a 5 Unit BEST BET Monday in the Patriots/Jets AFC East showdown on ESPN at 8:15 EST tonight! These 5 Unit plays are my *BIGGEST* releases on a daily basis, and this one is GUARANTEED or I’ll send you Monday’s NFL plays for FREE!

Let’s CASH IN on Patriots v. Jets and MAKE SOME MONEY Monday. It’s easy, BUY THIS PACKAGE, follow along, and COLLECT your profits!

AAA Sports has made HISTORY in the NFL this season, delivering a ***MIND-BLOWING*** performance! Even though they are off their 1st bad Sunday of the season, it’s still a 31-16 run!

Monday nights have been when AAA is at their best! They are a PERFECT 7-0 L7 weeks on MNF!

When all of my sources, contacts, systems, and stats agree on a game it’s usually BIG! We have that situation tonight on Patriots v. Jets and it’s a game you are not going to want to miss out on!

Ross has a 5* ATS winning side on the Monday night nationally televised game between the Patriots/Jets (8:15 ET/ESPN). Ross has gone a solid 28-18 (61%) L46 with his NFL pay picks this season. Finish Week 9 of the NFL schedule by purchasing and cashing in on this solid gold winner.

The New England Patriots visit the New York Jets in Monday night Football action. Which side of the Total will the combined score fall on? Your 100% Guaranteed answer is locked and loaded and ready to make the books pay for taking our action. Kick off after 8:20 pm et

It’s time to let Dana Lane dig you out of your weekend hole by taking advantage of tonight’s Monday Night Football winner.

When you win again make sure to purchase a weekly, monthly, or yearly pass to ensure your success through the Super Bowl.

On Monday night Football we have TOTAL Domination in AFC East Action. Backed with 2 long term systems and a plethora of angles. This ones a WINNER. Put the POWER of this cutting edge data on your side.

Are you ready to WIN AGAIN on Patriots v. Jets? Cole is. SIGN UP NOW and make today a profitable one!

Power Sports won his lone NFL total on Sunday, cashing the Under in Saints-Bucs. Now he takes aim at the MNF total w/ what will be his #1 MNF OU play for ALL of November!

I am 66% this season with my MNF releases. I absolutely love this Monday Night matchup. Follow one of the most successful MNF handicappers in the history of the business, all the way to the bank. Just get Joe D’Amico’s MONDAY NIGHT FOOTBALL WINNER.

Be sure to check out all available top rated NFL picks released by our experts every week during the 2020-21 season.