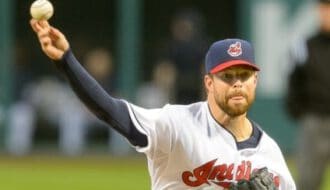 A full MLB card with all 30 teams in action and 15 games on tap for Tuesday. New 3-game series are starting up, while other teams play game 2 of their series.

There’s plenty of betting value to be found with current hot and cold pitchers and batting lineups.

Below is top free MLB baseball plays and analysis for Tuesday, May 7th, 2019 from our expert handicappers.

The Cleveland Indians should be highly motivated to bounce back with a victory here today against the White Sox after losing 9-1 in Game 1 Monday. They were upset as -245 favorites as Trevor Bauer simply did not have it.

Now the Indians are in a much more favorable price range as only -131 favorites here. Jefry Rodriquez is a little-known starter who is getting no respect for Cleveland. But he has handled himself well, posting a 2.13 ERA and 0.789 WHIP in his two starts this season.

The White Sox are 0-10 in Giolito’s last 10 starts after allowing two runs or less in their previous games.

Two poor starters go at it tonight when the Red Sox continue their series with the Orioles.

Hector Velazquez is averaging just 2.8 innings per start in his four starts this season for the Red Sox, so the Orioles are sure to get into their bullpen early.

Velazquez is 1-1 with a 4.22 ERA in three previous starts against the Orioles.

Boston is 12-2 OVER when revenging two straight losses where they scored 2 runs or less over the last three seasons.

The Nationals are no longer a contender with the departure of Bryce Harper and Daniel Murphy as well as losing their starting shortstop to injury. But they do have some pitching including Stephen Strasburgh (3-1, 3.45 ERA) who will suffered with this weak hitting line-up behind him.

I’ll take my chances here with Colorado as a small home favorite against the Giants.

Rockies also have an edge here, as they had Monday off while the Giants had to finish up a 4-game series at Cincinnati.

The Reds have hit the sixth-most homers in the majors. Yet Cincinnati is just 22nd in runs scored. Some of this can be explained by the Reds playing in one of the more homer-friendly home fields, Great American Ball Park.

Tyler Mahle gets the start for Cincinnati. He pitched well in his last outing giving up one run in five innings on the road against the Mets this past Thursday.

Mike Fiers goes for Oakland. He has a 6.81 ERA. The A’s may not have their most dangerous hitter, Kris Davis. Oakland could also be without its top reliever, Blake Treinen.

The A’s have lost eight of their last nine games. So are the A’s still worth backing as a slight home favorite? Studying this matchup harder the answer is Yes.

The Reds are 1-10 in Mahle’s last 11 starts. Mahle had surrendered 13 runs and 25 hits during his previous three starts spanning 17 innings before his last outing. Cincinnati has lost the past seven times Mahle has started on the road. Mahle is not a pitcher I want going for me. Fiers is a pitcher I can live with when he’s pitching at Oakland Coliseum where his fly ball tendencies don’t hurt him so much because of the ballpark configuration.

Oakland is 8-2 in Fiers’ last 10 home starts. Fiers held two of his last three opponents at home to zero runs going six innings in each of those shutout victories. Fiers has a lifetime 2.60 ERA in 10 appearances versus the Reds, including eight starts.

The A’s 1-8 record in their last nine games all came on the road. They have a winning home mark this season and are on a three-game home win streak. Davis hurt his hip making a rare outfield appearance this past Sunday. He’s confident he’ll be able to see action in this game as a DH.

Treinen is dealing with a sore elbow. He hasn’t pitched the past few days. Treinen is optimistic he’ll be able to pitch today if needed. The A’s also hope to activate Matt Olson from the injured list for this game. Olson had 29 homers and 84 RBI’s last season.

The Reds last played at Oakland in 2013. This is going to be a real cultural shock for them. Look for the A’s to get well and back on track with this series.