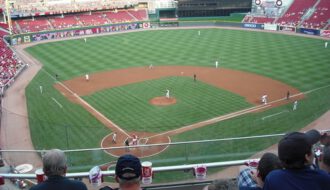 The shortened 2020 MLB baseball season continues on Monday with nine games on the betting schedule.

View 5 Featured MLB free picks and predictions with analysis for Monday, August 3, 2020 from handicapping experts below.

Click on a handicappers’ name for more info and to get their top rated selections.

Cincinnati has won three of its last four to turn things around after a 1-4 start. The Reds are scoring 5.2 runs per game overall and 6.2 runs per game at home. Look for them to take down the struggling Cleveland Indians today.

Cleveland has now dropped three straight and four of five. The Indians have been awful at the plate during this stretch, scoring a total of four runs in those five games. They are hitting just .193 and scoring 2.6 runs per game this season, including .133 and 1.0 runs per game on the road.

Things won’t get any easier for Cleveland today. Ace Sonny Gray gets the ball for the Reds looking to continue his incredible start to the 2020 season, picking up right where he left off last year. Gray is 2-0 with a 0.71 ERA and 0.552 WHIP in two starts, allowing just one earned run and seven base runners with 20 K’s in 12 2/3 innings.

There is simply too much value here to ignore. Yes the Phillies are off a layoff and now have to face an ace pitcher in Cole. However, to be nearly a 3 to 1 underdog in this spot makes Philadelphia worthy of considering for a small investment in this one.

The Phillies are managed by Joe Girardi who played some of his career with the Yankees plus managed them as well as recently as 2017. You know he really wants this game tonight.

While the Phillies can’t wait to get back onto the field after facing the Marlins amidst their covid-19 outbreak, the Yankees could get caught here still celebrating their huge win last night. Down 7-6 heading to bottom of the 8th against their long-time rival, the Red Sox, the Yankees rallied and ended up winning the game 9-7 courtesy of a 2 out 2 run bomb from Judge. A big game win and a big series win for the Yankees and they could be flat here.

Then you look at this Phillies lineup and they have some big sticks in it and plus they have a true “gamer” in Jake Arrieta on the mound. Veteran starting pitcher, solid lineup, and catching the Yankees at the right time for an upset plus getting a very big underdog money line here…it all adds up to a nice spot for taking a “flyer” on the road dog in this one.

The Minnesota Twins are 7-2 on the season while the Pittsburgh Pirates have a reversed record of 2-7.

The Twins will be forced to go with a bullpen-by-committee approach for this contest after expected starter Homer Bailey going on the injured list, but their bullpen has the fourth best ERA in baseball and I like the Twins to get it done here.

Great value here with the UNDER 8 in Monday’s NL West showdown between the Dodgers and Padres. I know LA has a loaded offense, but the number here is too high given the talent both teams will be sending to the mound.

Potential here that he could be facing a LA lineup that will be without both Mookie Betts (questionable) and Corey Seager (questionable).

The Dodgers have gone 5-1 in their last 6 games overall and now have ace Walker Buehler taking the ball against the San Diego Padres tonight. Buehler has never lost to the Padres, going 4-0 with a. 0.64 ERA and 0.64 WHIP in 4 lifetime starts against them.

Chris Paddack is 0-1 with a 5.65 ERA in 3 lifetime starts against the Dodgers.

Check out the premium MLB picks section for top rated and best bet selections released every day by a collection of baseball experts here at SCI.