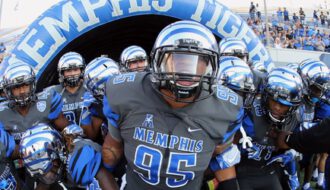 Saturday’s game is scheduled to start at 8:00 PM ET and be televised on ESPN.

Below you will find current odds and all available free and premium picks for this Week 1 college football matchup released by our expert handicappers.

Arkansas St and Memphis open their respective 2020 seasons with a familiar opponent, as the schools have met 57 times in the past (Memphis owns a 29-23-5 series lead). Arkansas St is led by head coach Blake Anderson, who came to Jonesboro for the start of the 2014 season and has led the Red Wolves to eight-plus wins in FOUR of his six years, including SIX bowl berths (just 2-4). 2019 was particularly trying one for the program, as during the season Anderson’s wife (Wendy) lost her two-year battle with breast cancer. On the playing field, starting QB Logan Bonner had a 10-1 TD/INT ratio through four games but a hand injury sidelined him the rest of the season. Alabama transfer Layne Hatcher stepped in and threw for 2,946 yards with a 27-10 TD/INT ratio, earning SBC Freshman of the Year honors. Both QBs are healthy heading into 2020.However, the SBC Player of the Year, WR Omar Bayless (93 catches for 1,653 yards with 17 TDs) is gone, as is fellow WR Kirk Merritt (70 catches / 12 TDs). Leading rusher Murray is back but he ran for a modest 820 yards (4.8 YPC) for a team that averaged only 127.2 YPG 0on 3.6 YPC. The defense struggled all season, finishing in the bottom 10 nationally in allowing 3478.3 YPG, while allowing 34.2 PPG.

Over on the Memphis side, the Tigers lost head coach Mike Norvell to Florida St, right after Memphis won the AAC championship game. That victory gave the Tigers a 12-1 record and earned the school its first-ever New Year’s Six bowl berth (lost 53-39 to Penn St). Taking over for Norvell is Ryan Silverfield, whose l-only game as a head coach was last year’s Cotton Bowl. So far, he gets credit for keeping QB Brady White and WR Demonte Coxie at Memphis. White threw for 4,014 yards (454 vs Penn St in the Cotton Bowl), becoming only the second Memphis QB to do so. He had 33 TDs and only 11 TDs, with Coxie as his main target )76 catches / 1,276 yards / 9 TDs). RB Kenneth Gainwell had 1,459 rushing yards (6.3 YPC / 13 TDs) as a freshman plus added 51 catches for 610 yards with three more TDs. However, Gainwell surprised the school by recently opting-out of the season (COVID-19 strikes again). DC Adam Fuller left for FSU with Norvell but Silverfield was able to bring in Mike MacIntyre as his DC. MacIntyre had success at both San Jose St and Colorado as a head coach (won National Coach of the Year at Colorado in 201^) and the defense returns SEVEN starters. Memphis did a good job at forcing TOs last season but gave up too many “big plays.”

I would have made a bigger play on Memphis if Gainwell had not opted-out but I will still lay the points with a team that went 7-0 SU at home last season, while averaging 38.4 PPG. Note that Memphis has been to THREE straight ACC championship games and has gone 20-2 SU at the Liberty Bowl (home stadium) from 2017-19. It’s expected that Memphis plans to allow a limited number of fans into the stadium and any ‘extra support’ can’t be a bad thing. Lay the points.

Get in on the BEST over/unders for sale on the site today for NCAA-F. It’s my TOTAL DOMINATOR on Arkansas State v. Memphis and it will “Totally Dominate!”

I am riding a HOT 14-5 Run L3 Days and I’m currently the #1 Overall Capper L7 Days! I am releasing a 5 Unit BEST BET Saturday in the Arkansas State/Memphis battle on ESPN at 8:00 EST tonight! These 5 Unit plays are my *BIGGEST* releases on a daily basis, and this one is GUARANTEED or I’ll send you my next day of NCAAF plays for FREE!

Jack releases his 20* Arkansas State/Memphis ESPN No-Brainer for just $39.95 Saturday! He has the winning side in this game NAILED tonight fresh off an easy winner on South Alabama +15 over Southern Miss outright Thursday in his first play of the season!

GUARANTEED or the next day of college football is ON JACK!

This money train stays right on track with Jack’s Saturday 3-Play Power Pack for $59.95! Leading the charge is his 20* Arkansas State/Memphis ESPN No-Brainer on the NCAA gridiron! You’ll also receive his 15* Raptors/Celtics TNT ANNIHILATOR on the pro hardwood along with his 15* MLB PLAY OF THE DAY on the bases upon purchase tonight!

Sign up and bet with confidence knowing you are GUARANTEED PROFITS or Sunday’s entire card is ON JACK!

We fire at the books Saturday with a big play on the college gridiron.

Time to add to your bankroll with Lee’s 40* ARKANSAS ST/MEMPHIS CFB SHARP STAKE!

This package is GUARANTEED TO SHOW A PROFIT or you will receive Lee’s next NCAAF card for FREE!

AAA is off a winning Friday in which they cashed 10* Game of the Week plays in BOTH NBA (Miami) & MLB (White Sox).

Razor’s 8* CFB O/U Stick it to your man SATURDAY!

Get in on one of the BEST over/unders for sale on the site today for NCAA-F. It’s my TOTAL DOMINATOR on Arkansas State v. Memphis and it will “Totally Dominate!”

Off to a PERFECT start to college football season! Sean’s AWESOME 149-113 CFB run continues with a 10* TOP RATED primetime totals winner on Saturday night! Find out whether Arkansas State and Memphis are headed OVER or UNDER the total – before it happens; punch your ticket now!

Currently No. 14 ranked OVERALL handicapper IN THE WORLD!

WIN NOW with the Total on the Arkansas State v. Memphis game!

As always, this package comes GUARANTEED TO WIN or the next day is FREE!

Faxon’s NCAA-F TO NO BRAINER Saturday!

I have isolated one key side situation from Saturday nights College Football rotational schedule involving the Memphis Tigers vs Arkansas State Red Wolves. Will the Tigers destroy their opposition or will the Red Wolves find a way to compete. Your 100% Guaranteed answer is locked and loaded and ready to make the books pay for taking our scholastic gridiron action. Kick off after 8 pm et

Check out all expert college football picks for Saturday and daily during the 2020-21 season.