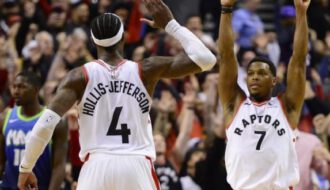 The NBA Playoffs continue on Wednesday afternoon with Game 2 of the Eastern Conference best-of-seven first round match-up between the 7 seed Brooklyn Nets vs. 2 seed Toronto Raptors at the ESPN Wide World of Sports Complex in Lake Buena Vista, FL.

Toronto leads the series 1-0 after a 24-point beat-down on Monday. Game will be televised on NBATV,

The Brooklyn Nets continue to get no respect from oddsmakers. They have been underdogs in all nine games since the restart, but they’ve managed to go 5-4 SU & 6-3 ATS in those nine games. That includes outright wins over the Bucks as 19-point dogs and Clippers as 9-point dogs, arguably the two best teams in the NBA.

Yes, the Nets got blown out by the Raptors in Game 1 by a final of 110-134. But they will show the same pride they have since the restart and come back with a much better effort in Game 2. I like their chances of staying within this 11.5-point spread this afternoon.

Jack went 2-0 Monday & 2-0 Tuesday for a PERFECT 4-0 Run L2 Days! He is ready to send you to bed a winner with his 20* Mavs/Clippers TNT Late-Night BAILOUT for just $39.95 Wednesday! He has the winning side in this game NAILED tonight behind a 100% System in his analysis!

GUARANTEED or Thursday NBA is ON JACK!

So the Raptors won game 1 by 24 and course the betting public was all over them. They will jump right back on them here as well based on those results. The thing here is though the Raptors his 22 3’s, yes 22! That won’t happen again. The Raptors were also 32-33 from the free throw line which the. Nets only shot 16. Both of those numbers will decline. Take the Nets and the points!

Join me today as I have one of my most popular and most profitable pro hoops releases there is. I have my NBA CRASH THE BOARDS PLAY. I finally dropped one yesterday. I can’t remember ever drooping two straight.

Al McMordie CASHED the Miami Heat yesterday to kick on his NBA Playoffs campaign. And the winning continues EARLY on this Wednesday, as <b>Big Al’s STEPPING OUT with a 100% Perfect NBA Winner</b> out of a 12-0 ATS angle. It’s <b>Big Al’s NBA PERFECT 10 CLUB PLAY</b>, and the <b>13th Winner in a Row</b> is RIGHT HERE! Get on board right now!

You would be hard pressed to find a hotter NBA hand than Stephen Nover, who has won eight of his last nine NBA plays for 89 percent! Don’t sleep in today because Stephen has a strong play on the early Nets-Raptors matchup. Stephen has uncovered key statistical data to go along with unique line value and his own in-the-zone winning feel to score a major profit before even finishing lunch. So take advantage of this discounted play and win, too!

4-1 last 5 NBA plays. Looking to cash in early on Wednesday? This NBA Early Bird Special play is a BIG upgraded 4 star rated selection on the first game of the day on Wednesday afternoon. Win early today!

While Major League Baseball is off to a DREAM start for Power Sports, the NBA has been a bit of a different story. But Wednesday is the day he turns things around. You get THREE PLAYOFF WINNERS in this one package, the first tipping off @ 1:30 ET!

Join Marc David with his Total on Nets v. Raptors!

David is RED HOT IN THE NBA with a 7-2 RUN! He puts that RUN ON THE LINE TODAY! Jump on board his NBA MONEY TRAIN AND BRING THOSE BUCKS HOME NOW!

Join Ryan Worden with his Total on Nets v. Raptors!

Rogers was a PERFECT 2-0 in the pro hardwood on Tuesday, nailing the Magic as his 10* PLAYOFF GAME OF THE YEAR and the UNDER in the Lakers/Blazers as well! Now Will continues his RED HOT run with another BLOCKBUSTER of EPIC proportions!