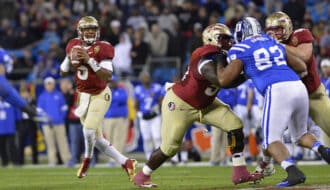 Saturday’s game is scheduled to begin at 3:30 PM ET and be televised on ABC.

Below you will find current odds and all available free and premium picks for this Week 2 college football matchup released by our expert handicappers.

This is a Free play on FSU.

Since the departure of Jimbo Fisher, the Seminoles have been a complete mess. They were just 5-7 in 2018, and last year after going 6-6 they lost to Arizona State in the Sun Bowl. The poor record wasn’t so much due to a lack of talent, but questionable coaching hires seem to be the main issue. With Mike Norvell coming over from Memphis and an experienced quarterback under center, you can expect this offense to be far better in 2020. They open up the season with a soft opponent, playing a Georgia Tech team that is in it’s second year since abandoning the Triple Option. The quarterback position isn’t a strength for the Yellow Jackets, and James Graham appears to be the favorite to win the starting job. He should not inspire much confidence, given that he completed just 45 percent of his passes last season.

Marc kicks off the college football season with a Double Perfect Situation Top Play Game backed with a pair of 100% ATS winning situations inside the game. Hurry, get it now – you’ll be glad you did!

We fire at the books Saturday with a big play on the college gridiron.

This package is GUARANTEED TO SHOW A PROFIT or you will receive Lee’s next NCAAF card for FREE!

Do not even consider making a move on Saturday’s NCAAF card without Mike’s CFB BOOKIE BLA$TER. The winning play is just a few clicks away.

This package is GUARANTEED TO PROFIT or Mike’s next NCAAF card is FREE!

This is one of Dana’s TOP three selections on his opening College Football card. Ride his current 8-2 streak to the cashiers cage as the defending Las Vegas Review Journal College Football champion defends his crown.

Put 28 years of Las Vegas betting experience to work for you tonight.

Higgs ready for College Football Saturday! A quick note. Tri-state area people – I will be Atlantic City Sunday/Monday – Hats + Shirts to give away. Not sure if at Bally’s or Ocean. Fan Cave the 20th! – We do have a nice WINNER lined up this afternoon. Time to BUILD YOUR BANKROLL

David starts this season off with his ANNHILATOR PLAY! HE ENDED LAST SEASON ON A 15-7 RUN AND IS PRIMED FOR CONTINUED SUCCESS! GET STARTED WITH HIS BIG SATURDAY OPENER AND GET READY FOR A GREAT YEAR!

Will Rogers is now a SHARP 3-1 (75%) with his NCAAF picks this season after easily hitting Miami on Thursday night! Now “The Coach” keeps the foot on the gas on Saturday, stepping out with a signature release which kicks off EARLY – don’t even consider missing out!

Ross Benjamin has a 5* ATS winning side on the Saturday game between Georgia Tech/Florida State (3:30 ET/ABC). This pick is backed with an unblemished college football season opener betting angle and plenty more.

Check out our overall leaderboards for the last 180 days, and you will see that Ricky is TOP DOG in 2020!

Check out all expert college football picks for Saturday, Week 2 and daily during the entire 2020-21 season.