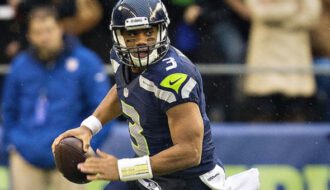 Sunday’s game is scheduled to start at 4:25 PM ET and will be televised on FOX.

Dallas is coming off a miracle win against Atlanta last Sunday as it overcame a 15-point deficit in the final six minutes to take it on a last second field goal. Some will point to that leading to a letdown here, but it should be just the opposite as to Cowboys can build on that with a big win over one of the top teams in the NFL to improve to 2-1. Seattle is 2-0 which is fortunate as it was outgained by the Falcons by 123 total yards in its opener and was a yard away from losing last Sunday night against the Patriots. Offensively, the Seahawks have been outstanding, but the defense is the real problem in this matchup. Big plays will be the difference as Dallas leads the NFL with 41 plays of 10 yards or more through the first two games while Seattle has allowed the most plays in the league of 10 yards or more with 47. Dallas is 16-4 ATS in its last 20 road games after trailing in their previous game by 14 or more points at the half. Here, we play against home favorites that allowed 24 or more ppg last season, after scoring 30 points or more last game. This situation is 25-3 ATS (89.3 percent) since 1983. Play (485) Dallas Cowboys

The Cowboys have seen both of their games decided by three points or less. Off last week’s thrilling comeback, they bring a lot of positive momentum into this week’s game. Wilson is obviously playing at a very high level. However, the Dallas offense is also very capable and the Cowboys will do their best to chew up the clock and keep Wilson on the sidelines. That said, I don’t think we should be surprised to see this one also come down to the wire. With Dallas 5-1 ATS the last six times it was an underdog in the +3.5 to +9.5 range, consider grabbing the points.

These 2 played a Wild Card 2 years ago in Dallas, with the Cowboys winning, 24-22. Russell Wilson has started out the season red hot, with 9 TD passes in his first 2 games. The Seahawks have given up 55 points already this year, after giving up 24.9 points per game last year. Cowboys are coming off a huge comeback last week, outscoring the Falcons 16-0 in the final 4:57, only their 2nd all-time win when trailing by 19+ points at halftime. Consider: Dallas is 5-1 ATS the last six times it was an underdog in the +3.5 to +9.5 range. Don’t be surprised to see yet another Dallas game go down to the wire

Jack is off to an 8-3 NFL Start this season! Jack brings you one final winner Sunday with his 15* Cowboys/Seahawks Late-Afternoon ANNIHILATOR for just $34.95! He has the winning side in this game NAILED behind a SWEET 25-3 System in his analysis!

The Cowboys & Seahawks are set to “hook it up” this week and you KNOW where you need to turn! AAA Sports is absolutely *ON FIRE* right now as they have WON 7 STRAIGHT IN NFL, plus they went a PERFECT 10-0 OVERALL last Sunday & Monday! They had the Under in Dolphins-Jags Thursday night, a 10* WINNER, and are now a LUDICROUS 39-15 L54 bets overall!

Jim Feist was 8-2 last Sunday/Monday in the NFL, including a 5-1 record with his totals. Jim loves playing NFL totals and if you like totals or just winning then this is a package you can’t afford to pass up. Jim has not one, but TWO big Over/Under winners for you in Sunday’s NFL slate. Get all the totals action you can handle in one package when you play Jim’s NFL 2-team totals parlay here on Sunday.

Power Sports has been winning some LARGE wagers of late. On Thursday, it was his 10* MLB Game of the Week on Kansas City! He followed that with a ~SIGNATURE~ *10* ULTIMATE POWER on the Celtics Friday night!

Power’s LARGEST NFL wager for September goes Sunday and it’s a TOTAL! What are you waiting for?

Higgs up with his Sunday SURE SHOT. Sean locked in with another WINNER in NFL Action. You think you know what’s happening at 4pm this Sunday? Take your opinion, grab a shovel from the garage, and dig a hole in yard – bury it. Higgs has you covered $

The Dallas Cowboys visit the Seattle Seahawks in Sunday afternoon late start action. Join me as I explain which side will the deliver the cash to their backers. Get the pro football info the books do not want you to have. Kick off after 4:25 pm et

Ross Benjamin has a 10* NFL Top Play ATS winning side on Sunday. Ross is a sizzling hot 8-2 L10 with his NFL picks this season. Furthermore, Ross is an independently monitored 107-53 since 2013 with his NFL picks during the month of September. This is final week of September so take advantage of this professional sports handicapper’s uncanny ability to begin NFL seasons in an extremely profitable manner.

Marc’s NFL 10* Game Of The Week is a beauty and best of all it comes directly from this PERFECT SYSTEM CLUB. Get it now and learn the 19-0 ATS perfect system inside the game -you’ll be glad you did!