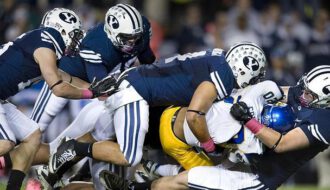 Monday night’s game is scheduled to start at 8:00 PM ET and be televised on ESPN.

Below you will find current odds and all available free and premium picks for this Week 1 college football matchup released by our expert handicappers.

Key Angle: It’s important to remember that Ricky never makes a bet on any game based on just one angle. In order to make the grade, all his premium picks must meet several important criteria. He doesn’t share all his secrets within his analysis, instead he chooses to reveal only the angle that he feels is the most significant. Here in this game the recent history of these two teams is particularly significant.

– The Midshipmen are 1-3-1 ATS in their last five versus Independent teams.

– The Midshipmen will have to replace a starting QB that was also their leading rusher.

Verdict: The Midshipmen appear to be overmatched in Week 1.

I am off to a PERFECT 3-0 NCAAF Start this season! I am releasing a 5 Unit BEST BET Monday in the BYU/Navy non-conference clash on ESPN at 8:00 EST tonight! These 5 Unit plays are my *BIGGEST* releases on a daily basis, and this one is GUARANTEED or I’ll send you my next day of football plays for FREE!

BYU and NAVY open their respective seasons here tonight against each other after seeing their initial openers scrapped by the Pandemic. Still, this is a very good matchup and Jim Feist has the winner for you in this game. Join a Vegas handicapping icon with nearly half a century of winning experience and WIN with JIM here in college football.

150-114 CFB run continues on Monday night! Sean is already off to a WINNING start in college football action this season and he’s ready to close out Week 1 with a totals ticket featuring BYU vs. Navy on ESPN! Over or under? Find out the winning answer – before it happens!

7-2 / 78% L9 CFB Top Sides! Are you ready for some Monday Night Football? RARE college football on a Monday and Scott “The Bulldog” Rickenbach has patiently waited all week long for this spot! Indeed it’s his FIRST and, of course, ONLY release of the opening week of CFB and he LOVES situation! Line is close to pick’em. How to play it? Find out NOW!

Power Sports is off a 6-2 WEEKEND in which he cashed a DOUBLE-DIGIT winner w/ the Under in SMU-Texas State! Now he’s got his sights set on his 1st side of the 2020 NCAAF Season! It’s a TOP RATED *10* GOW Monday night on BYU vs. Navy! What are you waiting for?

Larry kicked off his 37th year as a professional handicapper on Saturday with his 10* CFB Opener on MTSU/Army. Larry and his clients were ‘all smiles,’ as Army (-3) won 42-0! Week 1 of CFB 2020 concludes on Labor Day evening with BYU taking on Navy. Larry’s expert analysis details all you’ll need to know to play this game with C-O-N-F-I-D-E-N-C-E!

On Saturday, AAA certainly proved that they “know” the service academies. They had Army, who won 42-0 over Middle Tenn! Navy is action Monday night against BYU and AAA is making this play their TOP O/U BET of the week in NCAAF!

Currently No. 11 ranked OVERALL handicapper IN THE WORLD!

WIN NOW with the Total on the BYU v. Navy game!

As always, this package comes GUARANTEED TO WIN or the next day is FREE!

Get in on one of the BEST over/unders for sale on the site today for NCAA-F. It’s my TOTAL DOMINATOR on BYU v. Navy and it will “Totally Dominate!”

**LABOR DAY BIG PLAY** Ben Burns was 6-1 Sunday and he’s already 1-0 on the season with his top-rated college football plays. That brings him to 11-4 his last 15 top-rated football releases. He adds to that 73% RECORD with his #1 TOTAL OF THE WEEK. It comes from the Labor Day matchup featuring BYU taking on Navy and its featured on ESPN. Go get it!

When all of my sources, contacts, systems, and stats agree on a game it’s usually BIG! We have that situation tonight on BYU v. Navy and it’s a game you are not going to want to miss out on!

**WARNING** Schule’s CFB plays are known to cause increased heart rate and an overwhelming sense of euphoria. Playing these on a regular basis can result in an increase of disposable cash and can cause your bankroll to swell uncontrollably. It is not recommended to participate in these wagers if you have any allergic reactions to COLD HARD CASH!

The Platinum High End NCAAF Supreme Model move previously only available to Robs Client base. This Limited Level Investment is for those looking to step out

Ross Benjamin has released a 10* Top Play in the Monday night nationally televised game between BYU/Navy (8:00 ET/ESPN). Dating back to last season, Ross is 20-13 (61%) L33 with his college football pay picks.

Faxon has been on fire going 42-19 (69%) over his last 61 NCAA-F picks! Cole comes back again today with another big winnner with his NO DOUBT ROUT on BYU v. Navy!

As always, this play comes GUARANTEED TO WIN or the next day is FREE!
%

Check out all expert college football picks for Monday and every day during the 2020-21 season.