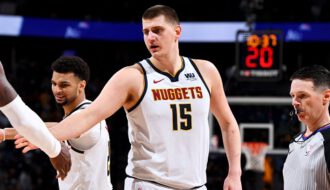 NBA Playoffs Game 2 of the Western Conference best-of-seven first round match-up between the 6 seed Utah Jazz vs. 3 seed Denver Nuggets at the ESPN Wide World of Sports Complex in Lake Buena Vista, FL.

Denver leads the series 1-0 after a 10-point OT win on Monday. Game will be televised on TNT.

1 Unit FREE PLAY on Jazz/Nuggets OVER 217

Both meetings between the Jazz and Nuggets since the restart have been shootouts. The Nuggets won both by finals of 134-132 and 135-125. Both did go to overtime, but they were both high scoring even before the extra session. They had combined for 230 points at the end of regulation in Game 1. Denver is 9-0 OVER since the restart as the Nuggets have clearly emphasized playing with more pace. Utah is 16-6 OVER after allowing 115 points or more this season. Give me the OVER.

I am riding a HOT 21-8 Run L5 Days which includes a 5-1 NBA Playoffs Start! I keep the money coming your way today with 3 NBA & 4 MLB winners inside my Wednesday All-Inclusive 7-Pack for $49.99! This card features THREE 5 Unit BEST BETS in the Nets/Raptors, 76ers/Celtics & Mavericks/Clippers games with the first tip at 1:30 EST this afternoon! You pay *ONLY $7.14/Play* for all 7 winners, and you are GUARANTEED-to-PROFIT or I’ll send you Thursday’s plays for FREE!

Unload on your bookie with Jeff’s JAZZ/NUGGETS *SIDE & TOTAL PACKAGE*!

Most associate Larry’s Las Vegas Insiders with the NFL, as he’s 90-61, 60% s/NFL 2012). However, Larry releases these exclusive plays in all sports. He won his NBA Las Vegas Insider Tuesday afternoon on Miami and is right back with a 2nd straight ‘afternoon delight’ on Wednesday. All NBA plays are 74-52, +$17,274 going back to Oct 30. Want in?

**SPORTSCAPPING NO. 1 OVERALL (2017)!**! It hasn’t take long for Brandon Lee to make a name for himself in this industry.

This amazing offer is GUARANTEED TO SHOW A PROFIT or you will receive Thursday’s entire NBA card for FREE!

Now he’s ready to make you a winner on Wednesday with his STRONGEST PLAY on the board today! This is a BEST BET that you DO NOT WANT TO MISS and it goes on:

<b>Al McMordie cashed the Miami Heat</b> yesterday, which moved his run to 12-7 his last 19. On Wednesday, in DAYTIME ACTION, Big Al’s UNLOADING on a terrific Basketball play out of an <b>EYE-POPPING 16-0 ATS SITUATION</b>. It’s <b>Big Al’s 100% Perfect ATS NBA Elite Info Winner</b>. Don’t miss out on the DAYTIME $$$$. Get on board right now!

Sean’s 35-27 NBA totals run continues with a 10* TOP RATED winner in afternoon action on Wednesday! Fresh off yesterday’s PERFECT card, join Murph as he delivers the cash on the hardwood AGAIN!

Long-time NBA pro Stephen Nover is enjoying another banner season winning 60 percent of his premium NBA plays this season. Stephen is in that winning zone going a sizzling 8-1 on his last nine plays entering today. There is more than meets the eye with this Over/Under and Stephen is there to exploit a mispriced line. Follow suit and stack the odds heavy in your favor by taking advantage of Stephen’s expertise, elite analysis and burning hand!

4-1 last 5 NBA plays. 37-22 last 59 NBA totals (63% Wins). This Jazz/Nuggets Total DOMINATION play is set for the Wednesday afternoon Game 2 matchup. Get on board and DOMINATE the books today!

Off a tough Tuesday, Ben Burns is poised to respond with a terrific Wednesday. This afternoon’s top-rated NBA “BEST BET” will play a prominent role. Ben’s top-rated basketball plays are on a long-term heater which has produced MORE THAN $100K IN PROFIT. You know what to do!

Join Trev Rogers with his Total on Jazz v. Nuggets!

Join Trev for his Wednesday GUARANTEED winner on Jazz/Nuggets!

Join Marc David with his Spread on Jazz v. Nuggets!

David is RED HOT IN THE NBA with a 7-2 RUN! He puts that RUN ON THE LINE TODAY! Jump on board his NBA MONEY TRAIN AND BRING THOSE BUCKS HOME NOW!