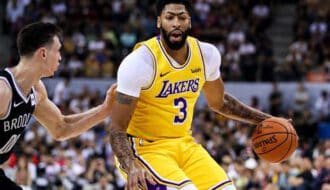 The series is tied 1-1 after the Lakers evened the series with a 111-88 beat-down and (against the spread) cover in Game 2. Tonight’s game 3 will be televised on ABC.

The Los Angeles Lakers were clearly going to come back with a big effort in Game 2 after losing Game 1, and that’s precisely what they did in a 111-88 victory.

The Blazers are 8-3 SU since the restart with only one loss coming by more than 5 points. They haven’t shot the ball well at all this series, shooting 39.2% in Game 1 and 40% in Game 2. That can’t continue as they have been one of the best offensive teams in the NBA since the restart.

I also think there’s too much being made of Damian Lillard’s dislocated finger. He should be just fine for this game, especially since it’s his non-shooting hand that is injured. And you know he will have put in the practice shooting with his finger taped up if he decides to go that route so he will be accustomed to it by game time.

NBA first round action continues here on Sunday and Jim Feist has isolated a total in one of the four games that he absolutely loves. This is a total that he expects to not come close to the posted over/under. Join a Vegas betting veteran with over 48-years of winning experience and WIN with JIM on Saturday with his NBA 1st Round Playoff Total of the Year!

Ryan’s 10-stars are akin to Game of the Month or even Game of the Year status without the hype. This 10-Star is backed by a mountain of research and features several machine learning metrics with one sporting a near-perfect 11-1 record. Just $40.00 for this Monster play.

Over the last month, AAA has experienced only a handful of losing days. Yesterday was definitely one of them. But that can’t change the fact that they are still on an UNFATHOMABLE 75-36 RUN the past 30 days!

NBA has led the charge by going 19-6 since the restart! The last two years find AAA at +$39,766 with ALL NBA selections!

I am off to a HOT 10-5 NBA Playoffs Start! I am releasing a 5 Unit BEST BET Saturday in the Lakers/Blazers Western Conference clash on ABC at 8:30 EST tonight! These 5 Unit plays are my *BIGGEST* releases on a daily basis, and this one is GUARANTEED or I’ll send you Sunday’s NBA plays for FREE!

No. 16 ranked Overall handicapper this season!

Now he’s ready to make you a winner on Saturday with his STRONGEST PLAY on the board today! This is a BEST BET that you DO NOT WANT TO MISS and it goes on:

A max unit winner with the Celtics on Friday pushed NBA guru Stephen Nover’s hot streak to 11-4 on his last 15 NBA plays for 73 percent! Stephen has been dominating the NBA all season winning 60 percent of his premium plays. Now Stephen has found his strongest August play on today’s menu. Go inside the numbers and take advantage of Stephen’s expertise, elite analysis and sizzling hand to take home another monster winner!

Unload on your bookie with Jeff’s LAKERS/BLAZERS *SIDE & TOTAL PACKAGE*!

**SPORTSCAPPING NO. 1 OVERALL (2017)!**! It hasn’t take long for Brandon Lee to make a name for himself in this industry.

This amazing offer is GUARANTEED TO SHOW A PROFIT or you will receive Sunday’s entire NBA card for FREE!

**MUST PLAY ALERT** OPENING RD. TOTAL OF THE YEAR!

Since 7/29, Ross Benjamin has gone a superb 43-25 (64%) with his premium pay picks in all sports. Ross has a 5* NBA winning total on the Saturday game between the LA Lakers/Portland (9:00 ET). Close your sports betting Saturday out on a winning note by purchasing this pick from a red-hot pro.

Join Cappers Club with his total on Lakers v. Blazers!
The Cappers Club is here to make you a smarter sports bettor! As always, “The Club’s” plays come GUARANTEED! You will profit or the next day is FREE!

Chip Chirimbes, the ‘Big Game Player’ and 7-time NBA Las Vegas Champion has been labeled as a ‘Playoff Wizard’ by the Nation’s media and hasn’t come close to that so far. Today, he has posted his ‘Guaranteed’ NBA Playoff Highest-Rated 5*Megabucks winner between L.A. Lakers and Portland. Chip has awards from Las Vegas Hilton, Stardust and Stations Casinos NBA Basketball Handicapping contests and you can receive his ‘Guaranteed’ winner for only $39.

Join Marc David with his Spread on Lakers v. Blazers!

With the return of NBA and NHL in August, the forecast is calling for a MASSIVE PROFIT HAUL over the next few weeks!

Bang your book god in baskets as Rob UNLEASHES damage from the Database with a RARE UNDEFEATED System that dates to 1995. The game also has Several Power Angles. End the night BIG in baskets with the most POWERFUL Data available.

This powerful O/U opportunity ALMOST was rated as a top 10* release, so make sure to make the most of it!