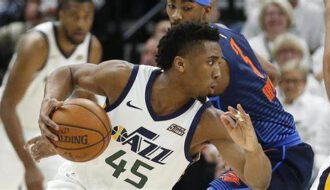 NBA Playoffs Game 5 of the Western Conference best-of-seven first round match-up between the (6) Utah Jazz vs. (3) Denver Nuggets at the ESPN Wide World of Sports Complex in Lake Buena Vista, Florida.

This series has trended to the over, but this is an elimination game, and we expect both defenses to show up big time here. And we are working against the highest total in the series tonight. After the last game you would think the oddsmakers would make a bigger adjustment here to the total. We think they want to draw over money in on this game. These are two Top 11 defenses, however, and in such a crucial game we don’t expect to see too many easy baskets. In fact, we think this might be the lowest-scoring game of the series.

Ryan is 11-6 ATS for the NBA playoffs for 65% winning bets and has a monster opportunity for you starting with the 7-Star Side, a free bonus 5-Star on the Total and then a 3-star parlay. He nailed his first parlay in the Toronto series. This 7-Star also includes a betting system that is 70-19 ATS for 77% winners in the regular and playoff seasons + 15-5 ATS for 75% in the playoffs alone.

If you are looking for the BEST BET in NBA for Tuesday then this is the ONE! Sal’s 10* Platinum Club Play is as STRONG AS IT GETS and it goes on
Jazz/Nuggets!

Don’t make a move on Tuesday night’s NBA playoff card until you learn of a game supported with a pair of perfect winning angles inside the game. It’s Marc’s Top Kill Play. Don’t miss it!

Come bet with a FORMER NBA WORLD CHAMP in pro hoops tonight! I am releasing a 5 Unit BEST BET Tuesday in the Jazz/Nuggets Western Conference clash on TNT at 6:30 EST tonight! These 5 Unit plays are my *BIGGEST* releases on a daily basis, and this one is GUARANTEED or I’ll send you Wednesday’s NBA plays for FREE!

Today we SLAM DUNK YOUR BOOK with my legendary, NBA SLAM DUNK PLAY. Get on this proven winner and be a winner.

If you want Jack’s biggest release tonight, then sign up here for his 20* Jazz/Nuggets TNT No-Brainer Tuesday! He has the winning side in this game NAILED, and you can too for just $39.95!

GUARANTEED or Wednesday NBA is ON JACK!

Unload on your bookie with Jeff’s JAZZ/NUGGETS *SIDE & TOTAL PACKAGE*!

Join Totals Guru with his Total on Jazz v. Nuggets!

Get in on one of the BEST over/unders for sale on the site today for NBA. It’s my TOTAL DOMINATOR on Jazz v. Nuggets and it will “Totally Dominate!”

No. 19 ranked Overall handicapper this season!

Now he’s ready to make you a winner on Tuesday with his STRONGEST PLAY on the board today! This is a BEST BET that you DO NOT WANT TO MISS and it goes on:

This week’s #1 NBA total is here and is just a “click away.”

Sean is back on the NBA hardwood with an EARLY evening o/u winner featuring the Jazz vs. Nuggets on Tuesday! Over or under? Find out the WINNING answer – before it happens – right here, right now!

Chip Chirimbes, the ‘Big Game Player’ and 7-time NBA Las Vegas Champion was 2-1 in NBA Playoff Best Bet action Tuesday posting his 4th straight winning day Chip has been labeled as a ‘Playoff Wizard’ bye the Nation’s media and is starting to show why. Today, he has posted his ‘Guaranteed’ NBA Playoff 4*Money Game (Total) winner between Jazz/Nuggets. Chip has awards from Las Vegas Hilton, Stardust and Stations Casinos NBA Basketball Handicapping contests and you can receive his ‘Guaranteed’ winner for only $29 or part of Chip’s Triple-Play of NBA Playoff Best Bet winners.

Chip Chirimbes, the ‘Big Game Player’ and 7-time NBA Las Vegas Champion was 2-1 in NBA Playoff Best Bet action Monday posting his 4th straight winning day. Chip has been labeled a ‘Playoff Wizard’ by the Nation’s media and today he has posted his ‘Guaranteed’ NBA Playoff Highest-Rated 5*Megabucks winner between Utah and Denver. Chip has awards from Las Vegas Hilton, Stardust and Stations Casinos NBA Basketball Handicapping contests and you can receive his ‘Guaranteed’ winner for only $39 or part of Chip’s Triple-Play of NBA Playoff Best Bet winners.

Faxon has been ON FIRE going 56-32 (64%) over his last 89 basketball picks! Cole comes back again today with another big winner with his Tuesday NO DOUBT ROUT on Jazz v. Nuggets!

Known for my ability to rip off MONSTROUS all sports winning streaks, I’m determined to make my next big run start TODAY! A 5-0 sweep of the board is the ONLY thing I’ll be satisfied with and this 10* signature “TRADE-MARK” from the pro hardwood is leading the way! Make sure to join me!

Join Marc David with his Spread on Jazz v. Nuggets!

After David came through yesterday with his NBA GAME OF THE YEAR, his customers can’t wait to see what he plans next! Well they didn’t wait long as he just released his TUESDAY DESTRUCTION! So if I were you I’d go with his HOT HAND and keep BRINGING THE BUCKS HOME! Let’s all make Tuesday another WINNING DAY AND ENJOY THE GAME!