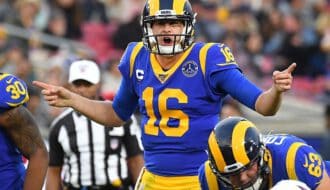 Sunday Night Football is scheduled to start at 8:20 PM ET and be televised on NBC.

Below you will find current odds and all available free and premium picks for this Week 1 NFL showdown released by our expert handicappers.

Jack is coming off a 5-0 Saturday SWEEP of the books! Jack is ready to send you to bed a winner with his 15* Cowboys/Rams NBC Sunday Night BAILOUT! He has the winning side in this game NAILED tonight, and you can too for just $34.95!

I am releasing a 5 Unit BEST BET Sunday in the Cowboys/Rams NFC battle on NBC at 8:20 EST tonight! These 5 Unit plays are my *BIGGEST* releases on a daily basis, and this one is GUARANTEED or I’ll send you Monday’s NFL plays for FREE!

6 STRAIGHT WINNING MONTHS and already RED HOT in September! WON AGAIN Saturday! 4-2 day with +150 money line DOG! Scott “The Bulldog” Rickenbach is having another HUGE YEAR in 2020! This long-time NFL guru already NAILED his SEASON OPENER with WINNER on KC Thursday! Primetime Punisher adds to his regular season NFL Sides Run of 5-0 L5! 6 IN A ROW?

17-6 last 23 NFL plays! I’m also on a 16-7 run in my last 23 plays overall, so it’s been a nice run leading up to the NFL Season. The Cowboys and Rams square off on Sunday night football tonight. This Sunday Night CASH play helps you finish your Sunday with a WINNER!

AAA Sports has been SO DOMINANT since returning from lockdown, going 120-71 with all picks, that you’ve probably forgotten that they made $13,000 (on the nose!) the last NFL regular season! They went 64-44-1 with all plays! This season kicked off with an EASY win on the Chiefs!

Larry opened NFL 2018 by going 5-0-1 with his 1st six SNF Magic Plays & it was “deja vu all over again” in 2019, as he opened a PERFECT 6-0 with his “Best Bet” SNF releases. Larry says there is ‘magic in the air’ in Week 1’s SNF clash between the Cowboys and Rams. Who better than this 37-year vet to deliver the ATS winner? Ball is in your court!

Knowing how the teams are going to approach a game is a major key in betting Over/Unders. Because of that knowledge we have an excellent opportunity to pad our pockets come Sunday. It’s one of the featured games on the week one card, and we simply can’t wait.

Unload on your bookie with Jeff’s COWBOYS/RAMS *SIDE & TOTAL PACKAGE*!

Get in on one of the BEST over/unders for sale on the site today for NFL. It’s my TOTAL DOMINATOR on Cowboys v. Rams and it will “Totally Dominate!”

The NFL season is finally underway after months of speculation and Matt could not be happier as he is looking forward to one of his best ones yet! He has produced profits of +$30, 137 in the NFL since 2012 and he adds to that with the Sunday Night Primetime Winner between the Cowboys and Rams! Watch and Win!

154-118 NFL run continues! Sean has one more winner in NFL action on Sunday, featuring the primetime showdown between the Cowboys and Rams on NBC! Over or under? Find out the winning answer inside and end your weekend on a WINNING note!

It’s a marquee matchup of the Cowboys versus the Rams in the opening Sunday night game of the season. It’s a fun game to watch and even a better game to make a huge profit on as long-time NFL sharp Stephen Nover has made this one of his strongest investments. Take advantage of Stephen’s expertise, elite analysis and proven NFL track record – 371-302 the past seven years – to cash a big winner knowing the odds are stacked in your favor!

End the week BIG on Sunday night Football as we have a POWERFUL Week 1 specific NEVER lost system in action on this game as well as a plethora of Totals angles 2 of which are PERFECT. Put the POWER of this cutting edge data on your side tonight.

Join Trev for his Sunday GUARANTEED winner on Cowboys/Rams!

The LA Rams host the Dallas Cowboys in Sunday night Football action. Which side has the edge? Join me for your 100% Guaranteed answer and get the pro football info the books do not want you to have. Kick off after 8:20 pm et

Chip Chirimbes the ‘Big Game Player’ and Las Vegas Hilton Handicapping Champion wants to congratulate all players that took advantage of his 2-0 NFL start winning both side and Total Thursday night. Staying ‘HOT’ Chip has posted his Top-Rated’ 4*Double-Up winner between Dallas and L.A Rams. Kick-off your season with this ‘Guaranteed’ Hotline winner for just $39 or part of Chip’s Fab-5 of ‘Guaranteed’ NFL Best Bet winners!

Ross has an NFL 5* winner on the Sunday night nationally televised game between the Cowboys/Rams (8:20 ET/NBC). Since 2013, Ross is an independently monitored and incredible 99-48 (67%) during the month of September with his NFL pay picks. Close your Sunday NFL wagering day out on a profitable note by purchasing this solid gold pick.

Rams! Cowboys! It’s the first Sunday night game of the season and I’m ready to GET ‘ER DONE!

Join me with a signature ‘TRADE-MARK’ release, one which JUST NARROWLY missed out on a top 10* ranking itself!

Check out all expert NFL picks every week during the entire 2020-21 season.