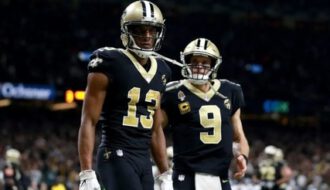 Sunday Night Football is scheduled to start at 8:20 PM ET and will be televised on NBC.

Rocky Atkinson has a 6* NFL Winner for Monday Night Football. One of the BEST HANDICAPPERS in the world is on an impressive 113-75 60% OVERALL run over his last 191 picks! Join the same handicapper that has made $1,000/game bettors $34,290 since January 20, 2020 with his Spread on Chiefs v. Ravens! Rocketman cashed 74% last year with all NFL picks!

Rickenbach NFL Primetime Punisher Sunday *He is 86% this SEASON!*

6 STRAIGHT WINNING MONTHS and UP HUGE in September too, Scott “The Bulldog” Rickenbach is having another HUGE YEAR in 2020! This long-time NFL guru WON his Primetime Punisher (10* TOP Dolphins) AGAIN Thursday! Regular season NFL Top Sides Run 8-1 / 89% L9! He is 6-1 / 86% in NFL night games this SEASON! Sunday Night NFL adds to 86% SEASON record!

The Iceman’s 2020 NFL GAME OF THE YEAR was a massive winner on the 49ers in the NFC Title Game. He was a PERFECT 4-0 on Championship Sunday, and he comes into Week 3 as one of the top overall handicappers in 2020. This GRIDIRON GURU is a BIG GAME SPECIALIST, as evidenced by going a PERFECT 5-0 in SB LII.

Really bad start to the football season. No excuses here and you’ll always get the truth from me. LOWEST prices of the year for Sunday’s NFL card. This NFL Sunday Night Football CASH helps you get paid on the Sunday night game. Packers/Saints winner inside!

The Packers and Saints clash in the Sunday night NFL game. You definitely want Stephen Nover in your corner for this one. Stephen is unique among sports handicappers in that he covered NFL teams for various newspapers during his sportswriting days. Stephen covered both the Packers and Saints during his sports writing career in Wisconsin and in New Orleans. Stephen knows these teams extremely well. So take advantage of Stephen’s expertise – 23 of 26 winning NFL seasons – top sources and powerful track record to earn a huge profit knowing you hold a monster edge!

Join in on the action with Lee’s 50* PACKERS/SAINTS NFL *BEST BET* TOP PLAY!

Ben Burns was 6-1 Satuday and he’s looking to SWEEP the board Sunday. Here, he serves up an ABSOLUTE BEAST of a total. Don’t wait!

AAA Sports is absolutely *ON FIRE* right now! They have WON 7 STRAIGHT IN NFL, the most recent victory being Thursday’s 10* on the Under Dolphins-Jaguars! Sunday’s TOP total is even STRONGER!

Let’s CASH IN on Packers v. Saints and MAKE SOME MONEY Sunday. It’s easy, BUY THIS PACKAGE, follow along, and COLLECT your profits!

We MUST SHOW A PROFIT or else you will get Monday’s PREMIUM NFL PICKS on us!

The Sunday night Play of the Month goes on NBC. The game has a Huge system and will end the week BIG. Get on it NOW. Those with us last Sunday Cashed big. Tonight we do it again with the most POWERFUL data available.

Cappers Club is on an impressive 100-82 (55%) run over their last 186 OVERALL picks! Join the same handicapper that has made $1,000/game bettors $9,990 since February 10, 2020 with their Total on Packers v. Saints!
The Cappers Club is here to make you a smarter sports bettor! As always, “The Club’s” plays come GUARANTEED! You will profit or the next day is FREE!

Al McMordie has dominated NFL Prime Time TV Games, with a 98-54 record over his last 152 Prime Time TV plays. If you enjoyed Big Al’s NFL Monday Night Football Game of the Month Winner on the Las Vegas Raiders last week, then don’t miss Big Al’s NFL Sunday Night Football Game of the Month today. It’s out of a sweet 56-23 ATS system, so get on board right now, and get the $$$$!

Power Sports’ 1st SNF wager of the season is a BIG ONE! Do not miss it!

Chip Chirimbes the ‘Big Game Player’ and Las Vegas Hilton Handicapping Champion was a winner again Thursday Night with Miami (+3) 31-13 OUTRIGHT over Jacksonville and is 6-2 75% in 2020 and a ‘Documented’ 47-20 72% with his last 67 Stand Alone’ NFL (Thurs., Sunday & Monday night) Sunday, Chip has posted his ‘Guaranteed’ Top-Rated ‘Bail-Out/Double-Up’ winner between Green Bay and New Orleans. Get it to ‘Double-up’ or Bail-Out’ either way its’ a WINNER!…only $49 or part of Chip’s Triple-Play or FAB-5 ‘Guaranteed’ to profit packages..

The Green Bay Packers visit the New Orleans Saints in Sunday night NFL action. Join me tonight for your side winner and until the Super Bowl Champs are crowned and watch your ROI go through the roof! Kick off after 8:20 pm et

Smash your man Sunday night in the NFL with Marc’s NFL Smash Play. It involves a team and a quarterback in a 100% ATS spotless winning situation – and it’s yours if you act now!

Highly anticipated matchup in the NFC for Sunday Night as the Packers take on the Saints. Short week for New Orleans, but many felt the Packers were due for regression this season. It’s a very important game for both clubs, but we feel there is solid value on one side of this contest.

Higgs ready to close out NFL Week 3 – Sean is locked in with the Packers and Saints. Time to put your opinion aside- Mr Money has your WINNER up now $

I was an ELECTRIC 6-1 with ALL my picks last Sunday and I’m ready for a REPEAT PERFORMANCE in Week 3! Get on board, OR GET OUT OF THE WAY!

Check out all available premium NFL picks for Week 3 and every week during the 2020-21 season.