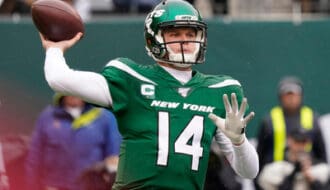 Thursday Night Football is scheduled to start at 8:20 PM ET and will be televised on NFL Network.

Below you will find current odds and all available free picks and best bets for this Week 4 TNF matchup released by our handicappers.

These teams rank at the bottom of the league in a majority of offensive stats. The Jets score 12.3 points per game, which is fewer than any other team in the league. At 30th in points per game, the Denver offense hasn’t played much better.

Head coach Vic Fangio announced Tuesday that Brett Rypien will get his first start at quarterback. Rypien was just activated from the practice squad earlier this week, and may take awhile to adjust to game speed.

Both of these teams are converting less than 35% of third downs, so they are likely to struggle at turning any offensive success into points.

The total is set low, but take the under in this matchup of poor offenses.

I am off to a 14-5 NFL Start this season and a 30-12 Football Start between pro and college! I am releasing a 5 Unit BEST BET Thursday in the Broncos/Jets AFC showdown on NFL Network at 8:20 EST tonight! These 5 Unit plays are my *BIGGEST* releases on a daily basis, and this one is GUARANTEED or I’ll send you my next day of football plays for FREE!

If you want Jack’s biggest release Thursday, then sign up here for his 20* Broncos/Jets AFC No-Brainer for just $39.95! He has the winning side in this game NAILED tonight and you can too simply by signing up!

100% PERFECT NFL on Thursdays this YEAR! KC Week 1. OVER Week 2. MIA Week 3. Scott “The Bulldog” Rickenbach, after a RARE tough Sun/Mon in NFL (he was 7-4 on NFL season and IS still 7-4 on season in CFB), is ready to make it a PERFECT 4-0 NFL with his Thursday picks! This Thursday Thrasher DEMANDS his HIGHEST rating! Ugly match-up? TOP PLAY VALUE!

The Broncos-Jets go at it tonight and you want veteran NFL guru Stephen Nover in your corner. Stephen has beaten the NFL in 23 of the last 26 seasons and has yet to lose this season in games involving these teams. There are key circumstances and below-the-radar elements that help point the way to a clear-cut right side. Read Stephen’s in-depth, top-notch analysis and find out why there is more than meets the eye in this matchup of winless teams.

Not sure who to take in Thursday Night Football? Lee’s uncovered a big edge for one of these teams. Cash in on the pro gridiron tonight with his 50* BRONCOS/JETS NFL *BEST BET* TOP PLAY!

Don’t miss out on a golden opportunity to build your bankroll with Steve’sBroncos/Jets NFL Sharp Money Top Play ($34.95)!

Matt closed last week with an OUTRIGHT WIN on the Chiefs and he now brings in a PERFECT 3-0 Primetime Run into Thursday with the matchup between the Broncos and Jets! His +$30,137 NFL run is extended here as he keeps the Primetime SURGE rolling along!

If you are looking for the BEST BET in NFL for Thursday then this is the ONE! Sal’s 10* Platinum Club Play is as STRONG AS IT GETS and it goes on Broncos/Jets!

Why do more members return to my service every year than any other? Because I HELP THEM PROFIT!

Do you want to beat the NFL on Thursday? My BEST BET on Broncos v. Jets will help you do just that and MAKE SOME CASH!

When all of my sources, contacts, systems, and stats agree on a game it’s usually BIG! We have that situation tonight on Broncos v. Jets and it’s a game you are not going to want to miss out on!

Do you want to be on the RIGHT side or take a shot in the dark? You can be in the know for once and it’s easier than you think. SIGN UP NOW for our 10* INFO PLAY on Broncos v. Jets!

AAA Sports continues to make HISTORY! They are on an 11-1 run in NFL (did lose GOY) and are a MIND-BLOWING 16-1 overall the L2 Sundays/Mondays, combined!

They are also a PERFECT 3-0 on TNF this season (KC, Cincy, Under MIA-JAX). A “RED DRAGON” (highly coveted play) is set to BREATH FIRE this Thursday!

This is the Executive Level Tier one TOTAL Investment Play in the NFL These are the personal Client release plays that only a few have access to, and for those looking for a premium move.

Over the years, my THURSDAY NIGHT PLAYS have been one of the most profitable in pro football. This week, e once again go into the weekend with bankroll as I have the winner of the BRONCOS/JETS. Just because it isn’t a marquee matchup, doesn’t mean it doesn’t offer value.

Power Sports closed out September with a 3-0 SWEEP last night, winning with the Reds (+1.5), Over in Cards-Padres (cashed in 3rd inning!) & the Under in NBA! Look for that to be the catalyst for a HUGE October!

The Thursday night matchup may look unattractive on paper, but Power LOVES the line! You’ll be KICKING yourself if you don’t play this one!

The Denver Broncos and the NY Jets do battle in Thursday night Football action. Which side of the total will the combined score fall on? Your 100% Guaranteed answer is locked and loaded and ready to make the books pay for taking our action. Kick off after 8:20 pm et

<b>Al McMordie’s a scorching-hot 98-55</b> his last 153 Prime Time NFL plays, and 35-16 his last 51 releases across all sports. Tonight, Big Al’s firing on the NFL match-up between the Denver Broncos and New York Jets. Don’t miss <b>Big Al’s NFL Thursday Night Football BLOWOUT WINNER</b>. Get on board right now!

This is going to be Dana Lane’s month starting with tonight’s easy Monday Night Football winner.

Take 28 years of Las Vegas betting experience to the window tonight. When you win make sure to purchase a weekly, monthly, or yearly pass to ensure your success right through the Super Bowl.

Chip Chirimbes the ‘Big Game Player’ and Las Vegas Hilton Handicapping Champion was 5-3 but dropped his Sunday and Monday night release and now a ‘Documented’ 47-23 68% with his last 70 Stand Alone’ NFL (Thurs., Sunday & Monday night) games 6-3 67% in 2020. Chip is 3-0 on Thursday’s off Miami 31-13 over Jacksonville. Today, he has posted his ‘Guaranteed’ Power Play winner between Denver and the New York Jets. Get this Best Bet WINNER NOW…only $39!

On Thursday start the Month big in the NFL with a Huge Double System Dominator in the NY vs Denver game. Rob starts the month fast and this Play has a Powerful Analysis backed with a Solid Stat Pack. Jump on now with the ONLY 2 time overall football seasonal leader

Higgs ready for NFL on Thursday night. Must See TV is back! 0-6 will turn into 1-7 as the Broncos and Jets look to get in the win column. Sean has your WINNER up now.

Are you ready to WIN AGAIN on Broncos v. Jets? Cole is. SIGN UP NOW and make today a profitable one!

10* THURSDAY NIGHT TOTAL OF THE WEEK!

Don’t make a move on the Thursday night total without first checking in with Rogers, as he’s now stamped this pick with top rated 10* status – make the most of it!

Take a look at all available NFL best bets released for Thursday night and every week during the 2020-21 season.