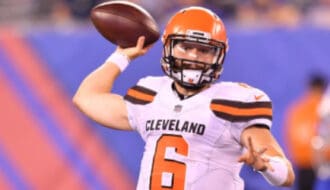 Thursday Night Football is scheduled to start at 8:20 PM ET and be televised on NFL Network.

Below you will find current odds and all available free and premium betting picks for this Week 2 NFL matchup released by our expert handicappers.

The Browns offense has to play big this week and Mayfield has to be excited for the quick turnaround against the Bengals. In Mayfield’s 4 career starts against Cincy, Cleveland has yet to score less than 23 points and has averaged close to 27. The Bengals defensive line is weakened with standout D tackle Geno Atkins who is out with a shoulder injury. The Browns will be able to run on Cincy with Chubb which will give Baker the time he needs to make some completions downfield.

On the other side Cincinnati’s offense has to be fired up as the Browns defense just looked lost on Sunday. Having a starting defensive end, outside linebacker and corner all out with injuries will not help the cause against a very talented rookie quarterback, who has talent all over the field with the return of A.J, Green, along with the speed of John Ross and Joe Mixon. Burrow will be itching to play better against the team he grew up rooting for and with a fellow Heisman Trophy winner watching from the opposite sideline.

Other reasons to take the OVER is the lack of crowd noise for Joe Burrow to contend with and the fact defenses looked unprepared in week 1 with missed tackles and blown assignments everywhere. The Over went 10-6 last week and 12 of the 16 games would have eclipsed this total. I expect these two offenses to play way better against lesser competition and cash my OVER ticket. The Pick: Take The OVER

It’s not easy to figure out which teams are going to cover, unless you have access to the same kind of info that comes across our desk.

That’s why there isn’t another group out there that CRUSHES the NFL like we do! Join us today with our 10* INFO PLAY on

Do you want to be on the RIGHT side or take a shot in the dark? You can be in the know for once and it’s easier than you think. Just SIGN UP NOW!

I am off to a PERFECT 7-0 NFL Start this season to pick up right where I left off last season! I keep the money coming your way Thursday with a 5 Unit BEST BET in the Bengals/Browns AFC North showdown on NFL Network at 8:20 EST tonight! These 5 Unit plays are my *BIGGEST* releases on a daily basis, and this one is GUARANTEED or I’ll send you Saturday’s NCAAF plays for FREE!

Jack is off to a 4-1 NFL Start this season and riding a HOT 12-4 Run L5 Days in all sports! After cashing in the Chiefs -9 last Thursday, Jack comes back with his 20* Bengals/Browns AFC North No-Brainer this week! He has the winning side in this game NAILED tonight, and you can too for just $39.95!

GUARANTEED or Saturday college football is ON JACK!

Al McMordie’s an awesome 97-53 his last 150 NFL Prime Time TV selections, and he’s firing on Thursday’s NFL Browns/Bengals game on the NFL Network. If you enjoyed Big Al’s EASY BLOWOUT WINNER last Thursday on the Kansas City Chiefs, then don’t miss this one. It’s out of a 100% Perfect, 8-0 ATS system. Get the 9th STRAIGHT WINNER right now, and BURY your Book tonight!

Marc’s well-oiled machine shares a nugget on Thursday night’s NFL clash between the Bengals and Browns in a jaw-dropping 100% ATS perfect winning situation. Put this Kill Play on top of your ticket tonight – don’t miss out!

Jim Feist wants you to start week 2 of the NFL with a big winner here on Thursday between two intrastate rivals, the Cincinnati Bengals and the Cleveland Browns. Jim Feist has his 20-Star Total Annihilator going in this game and it’s locked and loaded for a big winner. Join a football betting icon with nearly half a century of experience at beating the books and WIN with JIM here on Thursday with his 20-Star Total Annihilator.

We fire at the books Thursday with a big play on the pro gridiron.

Unload on your bookie with Jeff’s BENGALS/BROWNS *SIDE & TOTAL PACKAGE*!

Week 2 of the NFL season kicks off with Cincinnati Bengals @ Cleveland Browns Thursday night. Join Mike and build your bankroll for the upcoming busy weekend.

Power Sports was 2-0 on Wednesday! That included a 10* Total with the Under on Rangers/Astros, which ended up being a 1-0 final! It LITERALLY can’t get any easier than that!

Thursday brings Power’s *10* Total of the Week in NFL! If you recall, he also made last Thursday’s NFL O/U bet his *10* TOW (cashed it barely!) Time for a little “deja vu!”

Sean’s 88-60 NFL sides run and 160-122 NFL run continues with Thursday’s 10* TOP RATED winner featuring the Bengals vs. Browns on NFL Network! Find out which side delivers the cash – before it happens – right here, right now!

Long-time NFL guru Stephen Nover has beaten the NFL in 23 of the last 26 years and is off to a winning start this year with his premium and free plays. The Bengals and Browns go at it Thursday and Stephen has made one of his largest wagers on this matchup. There are clear factors that point to a right side here – along with several below-the-surface elements that Stephen has uncovered – that make this worthy of a strong investment. So stack the odds high in your favor by taking advantage of Stephen’s expertise, elite in-depth analysis and powerful track record to turn a tidy Thursday profit!

Off Monday’s EASY WINNER with the Titans/Broncos ‘under’ the total, internationally renowned “Totals Guru” Ben Burns attacks the Cincy/Cleveland total. Burns is on a 67% NFL TOTALS HEATER since last December. If you plan on making any O/U picks in Week 2, this is where you need to begin. Don’t guess!

Fresh off a 3-1 Sunday/Monday in the NFL, Matt looks to keep attacking two books! He gets things started on Thursday Night with the primetime matchup between the Bengals and Browns! Both are coming off opening week losses and Fargo knows which team responds! Do not miss out!

On a 37-15 71% run on our Top Plays. This is only our second Top Release in the past seven months! We are very selective when stepping out on a game, but we have one such opportunity on Thursday. Join us for our Strongest Football Play of the Season as the Bengals & Browns do battle.

Fresh off a sweep with his MNF picks, Ben Burns attacks Thursday’s “BATTLE OF OHIO,” with the Browns hosting the Bengals. To put it lightly, Ben simply LOVES this matchup. He’s had it circled since the schedule came out and now ITS TIME TO DELIVER!

AAA Sports’ overall record the L56 days is an UNFATHOMABLE 129-80! They were a PERFECT 5-0 on Tuesday! Last Thursday in NFL, they made it look EASY with the Chiefs. They feel this Thursday’s Bengals-Browns matchup may be even easier! The “RED DRAGON” remains one of AAA’s most COVETED selections and this one is ready to BREATH FIRE!

Get in on one of the BEST over/unders for sale on the site today for NFL. It’s my TOTAL DOMINATOR on Bengals v. Browns and it will “Totally Dominate!”

When all of my sources, contacts, systems, and stats agree on a game it’s usually BIG! We have that situation tonight on Bengals v. Browns and it’s a game you are not going to want to miss out on!

Check out our overall leaderboards for the last 180 days, and you will see that Ricky is TOP DOG in 2020!

Join Trev for his Thursday GUARANTEED winner on Bengals/Browns!

The Cincinnati Bengals take on the Cleveland Browns in the NFL battle of Ohio this Thursday night. Join me as I explain which side of the total the combined score will fall on and get the info the books do not want you to have. Tests 3-0 100% totals run dating back to last season! Kick off after 8:20 pm et

Ross Benjamin has a 5* ATS winning side on the Thursday nationally televised NFL game between the Bengals/Browns (8:20 ET/NBC). This pick is backed with an outstanding NFL betting system which has gone 46-12 ATS (79.3%) since 1981. Ross has gone an independently documented 101-51 (67%) since 2013 during the month of September. Start your NFL wagering week in a profitable manner by purchasing this solid gold pick.

** NFL Off Fast After BIG Sunday then Monday SWEEP **

he Thursday night TOTAL OF THE MONTH headlines tonight and Features 2 Thursday night Specific Systems and a LEW of Power Angles. Get on it NOW and CASH Out with the ONLY 2 Time OVERALL FOOTBALL Seasonal Leader on the site.

My 10* NFL run has now reached a SHARP 7-3 (70%!) The Bengals and Browns get ready to battle in an important NFC North battle and I’ve uncovered a CRUCIAL angle that the bookmakers are slow in recognizing! A signature “TRADE-MARK” designation has been attached to this release – make sure to make the most of it!

Hurry, take IMMEDIATE advantage of this specially priced 10* NFL release between the Bengals and Browns on Thursday night!

Higgs up for Thursday night. Bengals and Browns get us started in Week 2. Sean has your Sure-Shot WINNER up now. Make that SMART MONEY MOVE and get on board today $

Check out all expert NFL picks every week during the entire 2020-21 season.